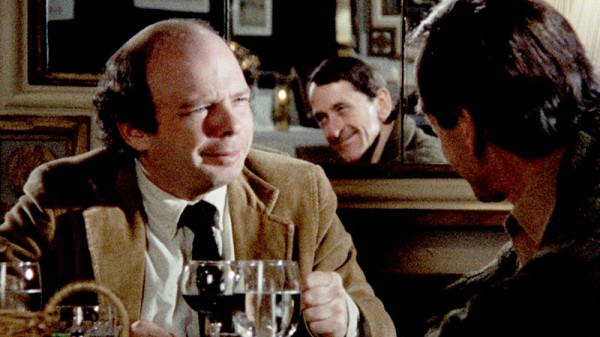 My Dinner with Andre is a 1981 film starring Andre Gregory and Wallace Shawn, written by Gregory and Shawn, and directed by Louis Malle. The film depicts a conversation between Gregory and Shawn (apparently playing themselves) in a chic restaurant in New York City. Based mostly on conversation, the film’s dialog covers such things as experimental theatre, and the nature of life. The dialogue contrasts Shawn’s modest, down-to-earth humanism with Gregory’s extravagant spiritual experiences. -Wikipedia

This excerpt I chose and printed here for you to read comes across as one of Gregory’s extravagant experiences. Perhaps there is some extravagance to it. However, even though coming across as a bit extreme, there are many points that we should find to be of interest and relevance. Dehumanizing of people by an unhealthy increase in selfishness, emphasizing and pronouncing industrial development and corporate greed to the point of having a need for shelters of “human” culture (“planets within planets”) – are some of the threats we should be aware of. I find these ideas worth paying some attention to.

OK. Yes. We are bored. We’re all bored now. But has it ever occurred to you that the process that creates this boredom that we see in the world now may very well be a self perpetuating, unconscious form of brainwashing created by a world totalitarian government based on money? And that all of this is much more dangerous than one thinks? And it’s not just a question of individual survival Wally, but that somebody who’s bored is asleep, and somebody who’s asleep will not say no?

See, I keep meeting these people, I mean, just a few days ago I met this man who I greatly admire. He’s a Swedish physicist, Gustav (last name unintelligible), and he told me that he no longer watches television, he doesn’t read newspapers, and he doesn’t read magazines. He’s completely cut them out of his life, because he really does feel that we are living in some Orwellian nightmare now, and that everything you hear now contributes to turning you into a robot.

When I was in Findhorn, I met this extraordinary English tree-expert who had devoted his life to saving trees. He just got back from Washington, lobbying to save the redwoods. He’s 84 years old and always travels with a backpack because he never knows where he’s going to be tomorrow. When I met him in Findhorn he said to me, “Where are you from?” and I said, “New York”. He said, “Ah, New York. That’s a very interesting place. Do you know a lot of New Yorkers who keep talking about the fact that they want to leave but never do?” I said, “Well, yes” and he said, “Why do you think they don’t leave?” I gave him different theories. He said, “Oh I don’t think it’s that way at all. He said, “I think that New York is a model for the new concentration camp, where the camp has been built by the inmates themselves, and the inmates are the guards, and they have this pride in this thing they’ve built. They’ve built their own prison, and still they exist in a state of schizophrenia where they are both guards and prisoners. As a result they no longer have, having been lobotomized, the capacity to leave the prison they’ve made, or even to see it as a prison.

Then he went into his pocket and took out a seed for a tree and said, “This is a pine tree”. He put it in my hand and said, “Escape before it’s too late”. See, actually for two or three years now I had this very unpleasant feeling that we really should get out. And we really should feel like Jews in Germany in the late 30’s. Get out of here. Of course the problem is where to go, because it seems quite obvious that the whole world is going in the same direction.

I think it’s quite possible that the 1960’s represented the last burst of the human being before it was extinguished. The rest of the future there will simply be all robots walking around. Feeling nothing, thinking nothing. And there’ll be nobody left, almost nobody, to remind them that there once was a species called a human being with feelings and thoughts. The history and memory are right now being erased, and soon nobody will really remember that life existed on the planet.

Now, of course, (the Swedish physicist) feels that there’s really no hope, and that we’re probably going back to a very savage, lawless, terrifying period. Findhorn people see it a little differently. They are feeling that there’ll be these pockets of light springing up in different parts of the world. That these will be in a way invisible planets on this planet. That as we, or the world, grow colder, we can take invisible space journeys to these different planets, refuel for what it is we need to do on the planet itself and come back. It’s their feeling that there have to be centers now where people can come and reconstruct a new future for the world.

When I was talking to (the Swedish physicist) he was saying that actually these centers are growing up everywhere now and that they are trying to do what Findhorn was trying to do, and in a way what I was trying to do. I mean these things can’t be given names, but in a way these are all attempts at creating a new kind of school or a new kind of monastery, and (the Swedish physicist) talking about the concept of reserves, islands of safety, where history can be remembered and the human being can continue to function in order to maintain the species throughout a dark age.