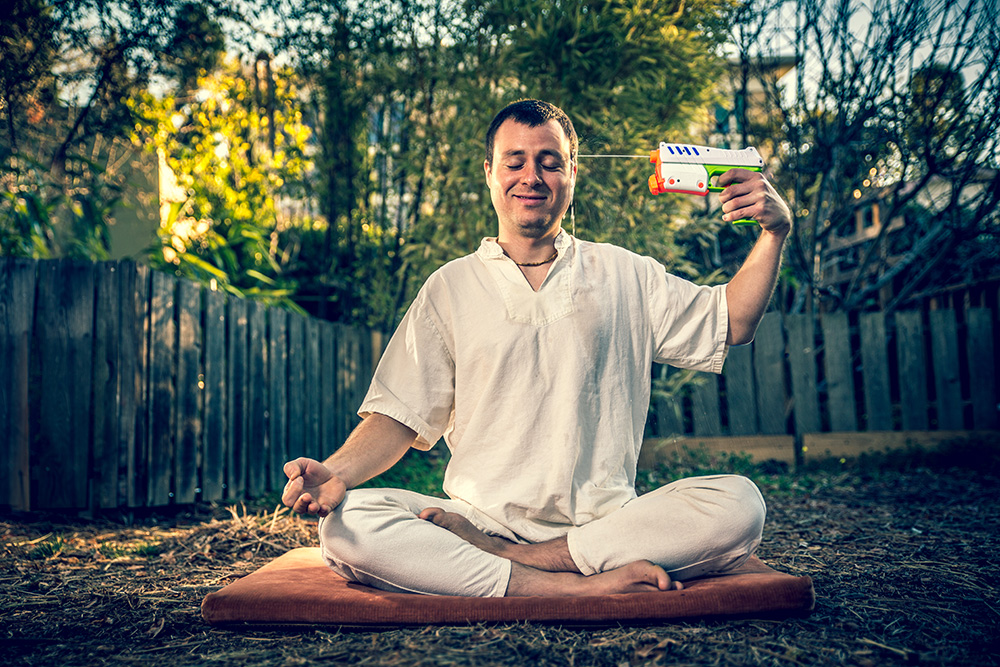 There are many possible motives for suicide. Saintly people, for example, sometimes commit suicide to atone for some serious mistake or as an involuntary expression of some extremely deep emotion.

Cota Haridās drowned himself in a sacred river as an expression of spiritual grief.

Sanātana Goswāmī planned to kill himself under the juggernaut-wheels of a huge sacred cart.

Raghunātha Goswāmī attempted suicide by leaping from the cliff of a sacred hill.

Śiva’s wife, Sati, for example, committed suicide out of grief of being related to her father, who had disrespected her husband.

The result of suicide, like everything, depends on the motive. Sati’s result was that she became Parvatī, married Śiva again and was free from her inglorious previous family/father. This shows that suicide does not always have a negative result.

Almost always, however, suicide is an unrecognized expression of the desire for moksha (spiritual liberation). The pains and depressing, inescapable realities of existence become too great to bear; they vastly outweigh the joys and pleasures of life – one decisively prefers not to exist at all, rather than exist amidst such unbearable circumstances.

Since the desire for moksha is unrecognized, the individual seeks to end their existence by some physical means – a bullet, a pill, a blade, a steep drop, etc. If the desire were recognized as a desire for moksha the individual would instead recourse to nihilistic spiritual disciplines to extinguish his or her existence altogether – a much more effective form of suicide – since it destroys not just the physical self, but also the emotional self.

What destination is attained by a person who physically kills themselves?

It depends on their consciousness at the time of death. yat yat vāpi smaran bhāvam tajantyante kalevararam – “Whatever your heart is absorbed in when you die will become the general condition of your next birth.” (Bhagavad Gita 8.6)

Not always, but most often the consciousness of a person committing suicide is tragic and filled with negative emotions. Therefore most often, the destination of those who commit suicide is tragic. It is not always the case, but it is arguably the norm. When a person dies with a lot of unfinished, unresolved emotional ties to people, places, and things in their life, they will find themselves unable to move on to their next birth. A suicidal person, specifically, will also be loathe towards the proposal of starting the whole depressing cycle over again in another birth. When the mind is paralyzed from moving on to the next life, the being has to exist for a while without a physical form, only in an emotional “body” – a very troubled emotional body.

People tend to experience such beings as “ghosts” and so on. Often, people who commit suicide have many, many unresolved issues with their life, thus it is quite frequent that suicide produces what many people call “ghosts.”

Another problem is that suicide most often leaves behind unfulfilled responsibilities. This is a serious karmic problem incurred by committing suicide. If a person is old, legitimately renounced, or somehow has fulfilled or never incurred many familial and social responsibilities, this may not be an issue.

Eventually (it can take centuries) the ghost forgets his or her negative ties to the previous life and drifts slowly towards another birth. In that next birth they will have to again deal with what they wanted to escape: being alive in a painful world.

If a person recognizes the suicide impulse as the desire for moksha and fulfills that impulse not by physical suicide, but by “spiritual” nihilism – what is the result?

Another type of “ghost” – really.

They extinguish their false existence, which is good, but they do so with a sense of disgust, disdain, frustration, or repulsion. These negative motives invariably generate negative results. The result of such moksha is to obliterate one’s false being, but not attain any true being – a type of ghostly existence in a sense, in between falsehood and truth, and neither of either. Like a ghost, they exist for sometime without any tangible existence. Eventually, the negative, unresolved emotional ties to the false world will again pull them into subdividing their consciousness into negative existence and they will again acquire a material birth.

In the end, suicide of either type fails to solve the problem. You eventually have to actually face your problems and solve them. The problem is suffering. Self-centered existence is the root of suffering. Selfless existence is the end of suffering and the root of joy. “Selfless existence” means an existence of pure love. Pure love is realized in its most perfect zenith when the beloved is absolutely pure and real – focused on the absolute reality as the supreme beloved.

The only real way to end suffering is love – bhakti. Practice of bhakti is the only way to accomplish what suicide would like to accomplish, but cannot.

Or Perhaps Just Some Of Them?