Living in our high-tech world, it seems today almost anything is possible. We are creating not only the new and improved, but are becoming exceptionally good at mimicking life itself. Many are familiar with our new digital friend “Siri,” and other similar examples of technology known as “artificial intelligence.”

However, I, like others, quickly found out the human-like “intelligence” of “Siri” is not at all the “intelligence” we’d like her to be. She is a nice gimmick at best. Users start to notice her limitations, once the seemingly witty remarks become noticeably redundant as she provides her often irrelevant pre-programmed answers. How many times did you shout “Dammit Siri!” as she again directed you to an old abandoned warehouse, instead of a supposedly existing gas station? Perhaps AI (artificial intelligence) is not what it is all cracked up to be. But, perhaps we haven’t yet seen its full potential?

THE WORLD’S MOST ADVANCED

Meet ASIMO, the world’s most advanced humanoid robot. Initially introduced way back in October of 2000 by Honda, ASIMO is a robot designed to be a multi-functional mobile assistant. ASIMO was designed with very advanced recognition technology, giving the robot the ability to move objects, exhibit various postures and gestures, and be aware of the surrounding environment. ASIMO can even recognize faces, even when ASIMO or the human being is moving. It can individually recognize approximately ten different faces. Once they are registered, it can address them by name and distinguish them by sound.

Many people at the exhibition are astounded upon first seeing a robot of this caliber. Many of the typical responses included things like:

“Wow, it looked like someone was actually inside that thing,” said another.

One participant even stated, “I feel an emotional connection; I feel a kinship with Asimo and could easily see how a person could get attached.”

Many people there also stated that they felt a great sense of human accomplishment, in addition to the astonishment, and are happy that we, as a civilization, could create such a “life-like” piece of technology. 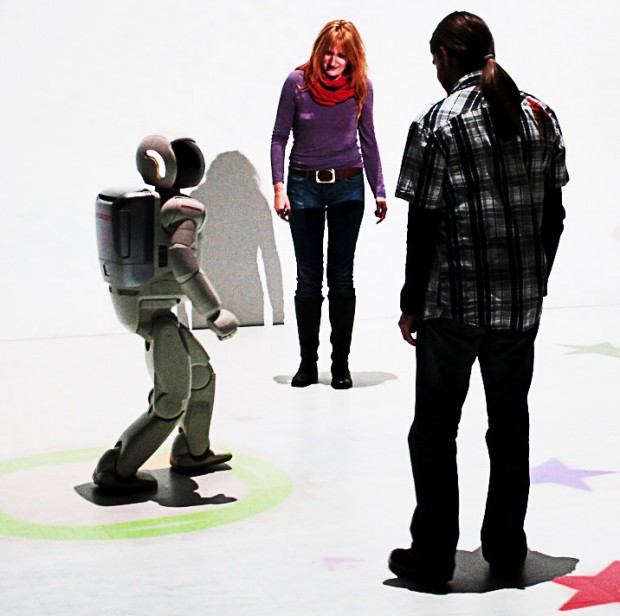 Is the simulated world itself conscious without the conscious actor using the interface technology?

While ASIMO and others are already being prepared as personal assistants for home and commercial markets, many are asking a more philosophical question, which also happens to be the biggest question regarding AI. Will we ever be able to create a computer that will be truly conscious and self-aware?

Since the rapid technological development of the 1980’s, many things are now possible. But, the question remains, can you have consciousness in a simulated program?

Actually, the same question comes up in the real world. In the real world you have molecules and different constituents of matter sitting together in different relationships. Many AI proponents argue that if you capture the different relationships that go into the brain, the process of thought occurring in the physical structure in the body, you capture the very essence of thoughts and self-cognizance, and can then produce a simulated conscious actor.

If you could capture inter-relationships and duplicate them in a computer, would the resulting model be self-aware? Right now I am writing and have a conscious perception of what is going on. You can imagine a robot speaking as I am, but there would be no actual consciousness, it would merely be a structure going through the programmed motions. Just because a computer program is simulating all the behaviors of a living conscious actor, it still is not enough to give the computer self-cognizance.

John Searle is an American philosopher and currently the Slusser Professor of Philosophy at the University of California, Berkeley. Among his notable concepts is the “Chinese room” argument against “strong” artificial intelligence. Searle states: “Just because a computer program simulates all the different relationships that go into conscious thought that doesn’t mean it will be conscious like you or I.”

The Chinese Room argument, devised by John Searle, is an argument against the possibility of true artificial intelligence. The argument centers on a thought experiment in which someone who knows only English sits alone in a room following English instructions for manipulating strings of Chinese characters, such that to those outside the room it appears as if someone in the room understands Chinese. The argument is intended to show that while suitably programmed computers may appear to converse in natural language, they are not capable of understanding language, even in principle. Searle argues that the thought experiment underscores the fact that computers merely use syntactic rules to manipulate symbol strings, but have no understanding of meaning or semantics. Searle’s argument is a direct challenge to proponents of Artificial Intelligence, and the argument also has broad implications for functionalist and computational theories of meaning and of mind.

Because it is merely a program that is being executed, there is no actual conscious awareness on the computer’s part. But when it comes to studying the human brain, bio-chemists may argue that consciousness exists in the brain because of the presence of basic brain molecules, and that when you have specific combination of polypeptides in the brain, that combination will generate the conscious experience. And if you ask a bio-chemist, “What is it about these polypeptides that generate consciousness?” He will likely say that it is the structure and the relationship of its molecular components.

HOW REAL CONSCIOUSNESS WORKS WITHIN UN-REALITY

So, what you have in the human brain is a relationship between molecules, just as you have the relationship of electrical currents following the pattern of a computer program!

Other than sophistication, what is the real difference? There is none actually.

If the brain is merely a hyper-complex machine, then by the same logic, we must question as to when and where consciousness actually arises in the machine of the brain. Does this mean our personality is nothing more than an evolved computer simulation? It may be that modern computer science has handed us the answer to this question.

We have already seen a similar instance where a real conscious actor is existing and acting within a simulated program. It is known to those in the computer world as “virtual reality.” In a virtual reality environment there is consciousness because there is an actual human being who is experiencing the simulated world through the medium of a virtual reality interface, which in this case would be the hardware interface, i.e. the head gear and gloves that hook up to the computer to allow the participant to interact with the virtual world.

Although there is sentience within virtual reality because of the human participant, is the simulated world itself conscious without the conscious actor using the interface technology? The obvious answer would be no. The simulated world is only a show of movement as long as there is a real user present. Similarly, if our brain and body is merely another machine, then could it be that we are non-material conscious actors experiencing a simulated world through a more sophisticated type of virtual reality hook up, such as the human body and brain?

“The Prime Living Entity is situated in everyone’s heart and is directing the wanderings of all living entities, who are seated as on a machine, made of the material energy [the human body]” Bhagavad-gita 18.61.

In a virtual reality simulation, the participants are all linked in the simulated world with a technological sensory interface. In the ancient Indian Sanskrit texts, Vedic science informs us that in real life we are conscious, non-physical entities; yet, we are linked to this world through an external sensory interface of the subtle intellect, mind, and gross physical senses. In this way many parallels can be made with sankhya-yoga, a classic philosophical system of India.

In Sankhya yoga texts, this world is described as the world of maya or the “illusory” world. It is here that the “atma” or non-physical spirit soul accepts a material body, mind, and senses and partakes in a simulated identity in a continual evolution of life and death. In this way the soul is reincarnated through a variety of different species of life, each new life being a kind of simulated or virtual reality.

A computer simulated consciousness is in the realm of this maya, this illusory exhibition of consciousness arising solely from mechanical events. Although there is no conscious entity in a computer or robot, it seems that the robot is real and living, because of the apparent operation and behavior of the computer. In the same way, it only appears that the body is itself alive, with the chemicals in the brain enacting the conscious experience. Rather, the body is merely an instrument for an incorporeal, transcendental entity.

This is the beginning of all the spiritual understanding that has been discussed in the Vedic literature in the land of India and civilizations abroad for thousands of years; we are not our physical bodies, but rather spirit souls using bodies as temporary vehicles.

It may be that computer science is giving us clues to understand our reality and the true nature of consciousness, which has already been described so nicely in the advanced Sanskrit records of human wisdom. There is a real want for this scientific spiritual knowledge today, and the Bhagavad-gita and Srimad Bhagavatam are important works in the study of consciousness.

The only end we would gain through this current technological showboating is that of an imitation. We can only imitate consciousness, and never create it, simply because of the fact that consciousness is not material.