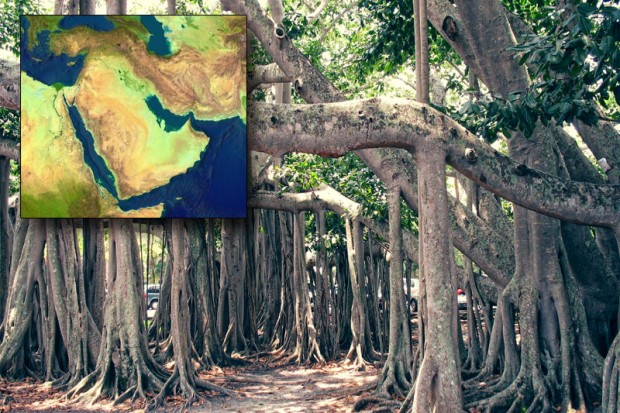 On August 22, 2013, the Financial Times published the following letter from KN Al-Sabah.

Sir, Iran is backing Assad. Gulf states are against Assad!

But Gulf states are pro Sisi! Which means they are against Muslim Brotherhood!

Iran is pro Hamas, but Hamas is backing Muslim Brotherhood!

Obama is backing Muslim Brotherhood, yet Hamas is against the US!

Welcome to the Middle East and have a nice day.

According to Krishna’s view, as expressed in the Bhagavad-gita, not only is the Middle East a mess, but the whole world with all of its subtleties and grossness is like a jungle one can easily get lost in. To illustrate the example Krishna compares this world to an unkempt banyan tree. The banyan tree naturally grows huge, with its branches extending upwards and downwards. When its branches reach the ground, they take root and thus the tree gains additional trunks. In this way, one banyan tree can turn into a small forest. When unkempt, a banyan tree looks like a labyrinth, a confusing maze, a jungle of branches and twigs.

As it is nearly impossible to navigate the way out of a labyrinth; similarly, it is difficult to solve the complex problems of this world. It seems that every solution is a cause for yet another problem. When comparing this world to the unkempt banyan tree in the fifteenth chapter of the Bhagavad-gita, Krishna advises the reader that the best solution is to cut down the banyan tree of material life with the ax of detachment and focus on the transcendental destination, the spiritual world, home of every soul.

In summery, the advice is: While trying to stay afloat in this complex and perplexing world, one is best advised to seek the way out of this world and make that one’s primary focus. Ultimately there is no material solution to material problems.

Eat Right For the Season

Ayurvedic Tips for a Healthy Winter Diet and Lifestyle