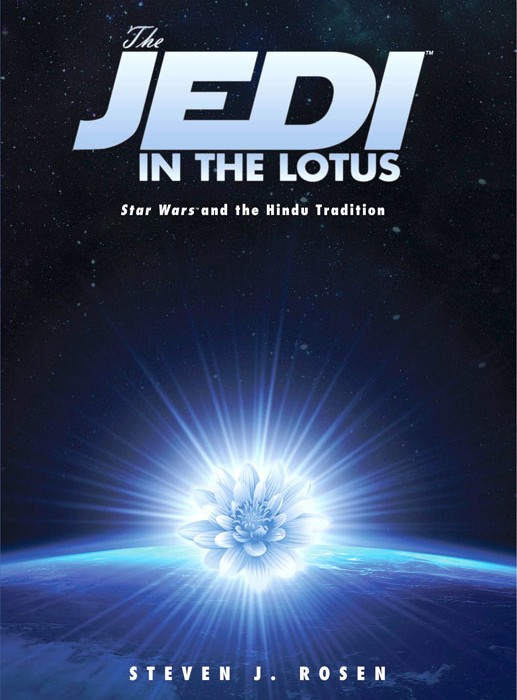 No films have had as huge an impact on global popular culture as the Star Wars film series. The Jedi in the Lotus: Star Wars and the Hindu Tradition is the latest book by the well-known scholar of Hinduism, Steven J. Rosen. Steven has previously published over twenty books, primarily on the school of Hindu, or Vedic, philosophy known as Vaishnavism. His latest book analyzes the influence of the Vedic tradition on the Star Wars films and discusses the many themes that they share. With the upcoming re-release of the entire series of films in 3D, it is a timely study which will help to bring to light many aspects of the saga which may have previously gone unnoticed by viewers. Steven was kind enough to answer a few questions about his intentions in writing it.

John B. Morgan: How did you first develop the idea of studying the influence of the Vedic tradition on Star Wars? What inspired you? 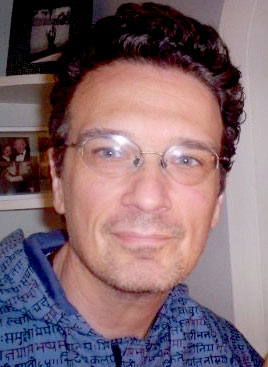 Steven Rosen: I was approached by a Hindu foundation, who wanted such a book to be written. Somehow, my reputation as a writer and scholar preceded me, and they contacted me to do it. Well, I must say that I was initially cautious: I hadn’t really looked into it. Did the Star Wars series represent what is today referred to as Hindu culture? Was there really overlap? Was George Lucas influenced by the sacred texts of India?

I told the Hindu foundation that I would have to look into it. So I rented all the Star Wars movies. I watched carefully. In the end, I was certain of the Hindu influence. That is to say, it became clear to me that Lucas, at least through Joseph Campbell, was led to many East-Indian ideas about good and evil, divinity, karma, reincarnation, and so on. It’s really very clear. There are parts of the epic series that seem too close to the Indian epics to be coincidental. When you see Star Wars and then go back to the Ramayana or the Mahabharata, you see what the prototype was. You see where it all comes from.

John B. Morgan: Most previous studies have looked for Buddhist or Christian influences in Star Wars, and yours is the first to examine it from a Vedic perspective. In the book you make the case that Star Wars owes more to the Vedic tradition than to any of the others. Can you give a few examples that demonstrate this?

Steven Rosen: First of all, I wouldn’t use the word “Vedic” – Star Wars does not draw on the Vedic samhitas or its appended texts. No. Rather, I would say that there is much in India’s epics and Puranic literature that made its way into Lucas’s films. Well, you need look no further than the Ramayana – the first Star Wars film is almost an exact replica of this story, down to the half-human/half animal Chewbacca, who is very clearly a Hanuman-type figure. I explain all of this in my book. The parallels are uncanny. And many.

Yoda’s teachings are right out of the Bhagavad-gita. Anyone who knows the Bhagavad-gita can see it. No doubt, there are Buddhist and Christian resonances in the Star Wars universe as well. I think Lucas drew on everything he knew. But, clearly, by his own admission, his main influence was Joseph Campbell, and it is no secret that Campbell was partial to Indian stories, myths, and its ancient culture as well. His inclination toward the land of the Ganges, its mysticism and exotica, is laid out in his posthumous book, Baksheesh and Brahman: Asian Journals – India. I quote from that book quite a bit. In the end, Lucas used much that he gleaned from Campbell, who was influenced by India’s sacred literature.

John B. Morgan: Before reading The Jedi in the Lotus, I would have said that the philosophy of the Jedi Knights in the Star Wars films is more similar to the Advaita, or impersonalist, monistic school of philosophy than it is to Vaishnavism, but you claim in the book that this is a misreading which is a result of the prejudices that we Westerners have about “Eastern” philosophies. Can you elaborate?

Steven Rosen: Yes, most people think that the East teaches only impersonalism, or that God is some abstract void, Brahman, the oneness of the universe. This is only one part of what is taught in the East. There is a strong monotheistic thread in Indian thought, too — worship of a personal Divinity. You have both forms of theism in India, as you do in the West. It seems clear to me that Lucas, being influenced by the Ramayana and the Mahabharata, brought a personal theism into his conception of the Force. Oh, don’t get me wrong: there is plenty of impersonalism there too. It’s all mixed up, as it is in most religious traditions. In fact, when the Vedic tradition – or even later Hindu tradition – is not studied under a bona fide spiritual master, impersonal conceptions of the Supreme rise to the fore. It’s only the legitimate Vaishnava lineages that teach otherwise. One must study these texts under a teacher. That’s the point. Only then will one “get” what the scriptures are really trying to say. Ultimately, the teaching of these texts are achintya-bheda abheda tattva, which means simultaneous oneness and difference between God and the living entity. A portion of this understanding tells us that God is both personal and impersonal. Of course, Lucas is not a theologian – really, Joseph Campbell isn’t either! – so, naturally, the end product will be a little confused. But one can see a personal divinity in the Force for sure. I am quite pleased with the way my chapter on that subject came out. 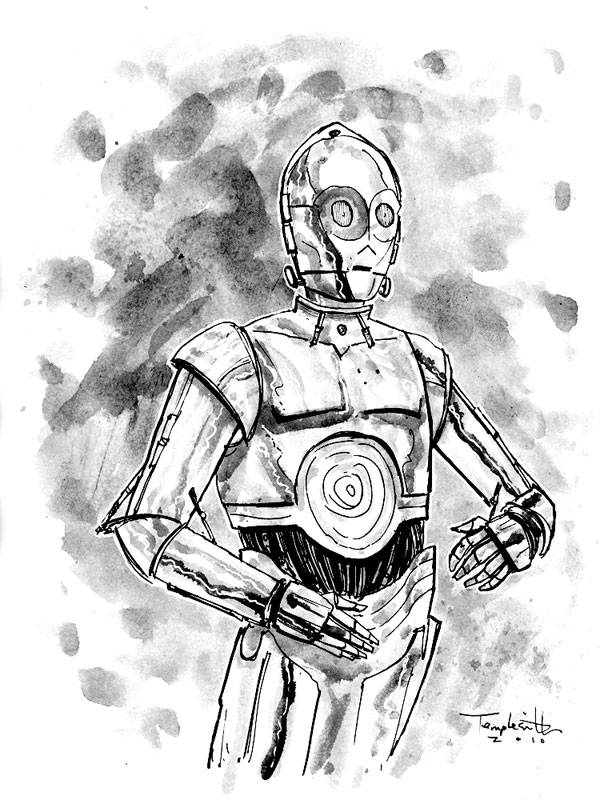 John B. Morgan: A concern you discuss in the book, which you say both Star Wars and Vaishnavism share, is a skepticism of science and technology – not an outright rejection, but rather a belief that science itself is not inherently good or bad, but only the uses to which it is put can be one or the other. However, in the book you seem quite pessimistic about what humanity is doing with science at the present time. Can you discuss your views on this?

Steven Rosen: Science is naturally based on the body. So it is limited to that sphere – the body and mind. The spiritual element is beyond its purview. So that’s one thing. The other is this: scientists depend on funding and grants to do their work. To survive, they often have to manipulate facts and truth to fit their theories. And people eat it up. They love it. The Vaishnava master Prabhupada called it “the cheaters and the cheated.” People want to believe convenient truths, and there are others who make a living supplying or nurturing these “truths.” But in fact both lose out in the end: the cheaters and the cheated.

Now, science, when used by perceptive, insightful people – people with a spiritual dimension – will yield a different result. Such people are honest. You see, as humans we tend to indulge four defects: we make mistakes, we are prone to illusion, we have imperfect senses and, yes, we have the propensity to cheat. With this as a backdrop, our chances of uncovering truth – which is arguably the goal of science – become slim. It requires people of great integrity to break through these barriers. But beyond that, they must take guidance from those who see beyond the veil, who are free from illusion. I am talking about lovers of God, pure devotees, and the sacred texts given by God. This is our only chance. One can easily doubt if such a thing is possible, but the sages say it is. The pure souls recommend this method.

John B. Morgan: Another aspect of this problem that you mention is the startling fact that several of the Nazi leaders were very interested in Vedic philosophy, and that the Nazis conducted research into Vedic texts. Considering that the Nazis could hardly be described as spiritually realized people, what are we to make of this?

Steven Rosen: They only were able to get technical knowledge and clinical information. They couldn’t get at the essence of those texts or penetrate the inner wisdom. Why? Well, firstly, because they were rife with the lesser characteristics I just mentioned. They were totally engrossed in the bodily concept of life, as is well known. But also – they had no guru. The whole process of Vedic revelation means getting it at the feet of a master. Otherwise, it remains quite concealed. It’s like going to a foreign country without any guidance or without the virtues of seeing the terrain through the eyes of a native, of one who knows. You miss so much. In regard to the Vedic literature, you really miss everything.

The Nazis were after information about flying machines and technical know-how, so they could have an edge in the war, in conquering others. This is obtainable by acquiring even a rudimentary knowledge of Sanskrit – you can get the external meaning of the texts, which were very advanced, even from a material point of view, and find all kinds of information that will allow one an advantage…

John B. Morgan: One of the more interesting parallels you draw is the possibility that there was something like Star Wars technology in ancient India, such as the flying vimanas (machines) described in the ancient epics. This is certainly at odds with what mainstream scholars are saying about the development of civilization. Do you believe that ancient India had such devices, and if so, what is the evidence for this?

Steven Rosen: Yes, I discuss all this in the book. Indian texts describe a culture and civilization that was well ahead of its time. These ancient Sanskrit texts are like blueprints for the planet, with more knowledge on more subjects than anyone can imagine. Just consider: flying machines. Who would have thought, but it’s there. Sanskrit scholars – who are divorced from the tradition, certainly not practitioners – have seen it and admit that it’s there. So what do you do with that? You have to accept it. If you don’t know, you don’t know. But if you’re a Sanskritist, you’re between a rock and a hard place: you can see for yourself that these ancient texts describe knowledge and technology that they couldn’t possibly know. It’s a great mystery. Of course, the greater mysteries are spiritual, and these exist in abundance in Vedic texts.

John B. Morgan: The Jedi in the Lotus can be seen in part as an introduction to Vedic philosophy for Star Wars fans. What do you think the Star Wars films have to teach someone who is trying to learn more about spirituality?

Steven Rosen: If they read The Jedi in the Lotus, they can learn much from the Star Wars films. This will make the connections for them. If not, it would be difficult to get any real spiritual knowledge from the film series. That’s just the sad truth of it. But, hey – read the book!

John B. Morgan: Thank you for taking the time to talk with us, Steven.