Now They are Inserting Human Genes In Cows’ DNA 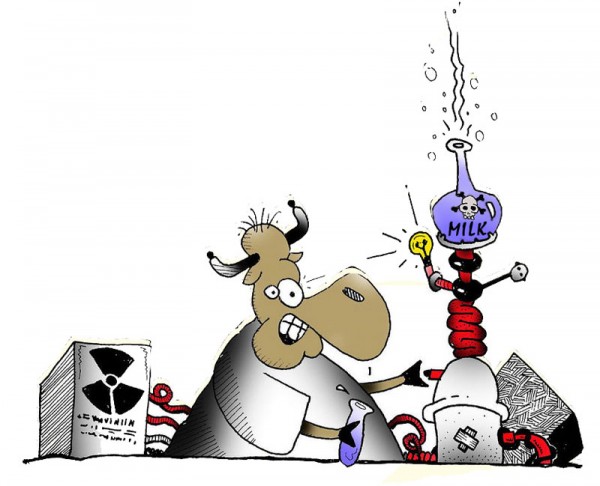 You already know that the processed milk sold in shops remarkably differs from the cow’s original gift of love. Now, clever scientists want to distort the miracle food even more. They do this by cloning cows—altering them by inserting human genes into their DNA. The process entails implanting genetically modified embryos of dairy cows into surrogate mother cows.

Since not every woman nurses her children, and formula milk for babies is known to be an inferior substitute, biotech investment money senses a market. The scheme? By scrambling the DNA of cow embryos with human genes, a “supermilk” will flow—concocted to have all the goodness the cow’s udder gives plus the high quantities of key nutrients a woman’s breast provides.

The research leader says, “For the ‘human-like milk’, 10 years or maybe more time will be required to finally pour this enhanced milk into the consumer’s cup.”

The lab reveals they have built up a herd of around 300 cows that are able to turn out “humanized cow’s milk.” Described in the scientific peer-reviewed journal “Public Library of Science One,” these transgenic animals, as they are called, physically resemble normal cows.

Tucked away in China, where the biotech laws are lax and the controversy zero, the experiments continue, while the rest of the GM food world waits. The scientists involved have, so far, managed to produce three generations of altered cows, but commercial production of the cow-human milk would require much larger herds.

In two particular trials, of 42 modified cows birthed, 26 died—10 immediately after birth and another 6 a few months later.

Biotech scientists throughout the world readily accept that the cloning technology used in genetic modification can affect the development and survival of cloned animals. The admitted scientific mystery, though, is why.

Insisting that the “human-like milk” is as safe as that from ordinary cows, the director of State Key Laboratories for AgroBiotechnology certifies its flavor: “The [concocted] milk tastes stronger than normal milk.” The medium and long range affect on the cows, humans, and nature? Unknown.

The invisible hand of the market economy and its ethics, monitored by the virtuous politicians we’ve elected, will see us through.

Why is everyone trying to lose weight?