In cultures and subcultures there tend to be different symbols of status and success.

For example, in rap culture, it’s the bling – the big chain made of precious metal that lets everyone know that the rapper is important. In a yoga/exercise studio, it might be some high-priced yoga pants or a special yoga mat that symbolizes the blessings of goddess Laksmi Devi (the goddess of wealth) in their life. Another symbol of success may be the car one is driving, or the kind of credit card one carries. Hence, it is very easy to notice materialistic success through external symbols, which inform others of their social status.

But what about success symbols for transcendentalists; those who endeavor on the spiritual path for a happiness not based on material possessions?

In materialistic endeavors, like capitalism, you can see the results of an investment. Someone makes a lot of money and their lifestyle reflects it. You can clearly perceive the material value that a sacrifice of physical labor bears. An outsider might see the success symbol of a business man/woman and immediately think, “Wow, what did they do? Maybe there is some opportunity for me as well? How can I get a similar lifestyle of enjoyment?” It inspires them and becomes a driving motivation for those that want to make money.

In the cultivation of God consciousness or spiritual consciousness, it may not be so easy to notice its value, because unlike matter, the fruits of spiritual labor are sometimes practically invisible.

Who among us would underestimate the value of an education, the value of a dear friendship, and especially the value of loving feelings toward another person? Such internal gains are the most vital factors in our own personal sense of happiness and wellbeing; though, it usually doesn’t appear externally.

Many who strive after wealth and fame only do so because of a lack of inner satisfaction and fulfillment. We feel that getting more wealth and fame will result in getting more attention, more affection, more education, and freedom from worries. Thus, even the attempt for material gain is really only for the purpose of getting deeper and meaningful things out of life.

Despite feeling a lack of satisfaction with material acquisitions, people may still be very reluctant to take up a spiritual discipline like meditation or bhakti-yoga, which is aimed at inner fulfillment because the results are seemingly intangible. Yet, we all should understand the symptoms of spiritual success and perceive it as a potential reality if we want to attain it.

LIFESTYLE OF THE SPIRITUALLY RICH

What are the symptoms of a spiritually wealthy person?

The Bhagavad Gita describes the state of genuine self-realization:

“One who is transcendentally situated at once realizes the Supreme Brahman and becomes fully joyful. He never laments or desires to have anything. He is equally disposed toward every living entity. In that state he attains pure devotional service” (Bhagavad Gita 18.54).

To the contrary, a spiritually rich person has no anxiety or depression. Unlike the materialistic person who depends on material things for happiness, the transcendentalist who is fully God conscious is fully satisfied due to the absolute nature of their object of mediation, and they have no personal motives to fulfill since every endeavor is an act of loving devotion to the Supreme. Meditation is not merely an act of trying to void all thoughts and feelings in order to enter a state of non-perception. Real meditation means to achieve a state in which the mind is saturated by God consciousness – seeing God in everything and everyone at every step of life.

So in that vision of non-duality, a transcendentalist sees a plain piece of paper and a hundred dollar bill with equal vision in regard to both objects being a means for inner fulfillment.

Transcendentalists also see others equally in regard to their intrinsic spiritual identity and not based on their outward bodily appearance. The materially driven person often considers their self worth based upon what others think of them or will think of them. Thus they tend to categorize themselves and others based on what they own or possess, such as ugliness or beauty, wealth or poverty, etc. and treat others according to that perception. A transcendentalist on the other hand, adept in realization of the self, can see the soul of every living being beyond their external bodily designation. The transcendentalist recognizes their own spiritual worth apart from their possessions and can see others in the same way.

Giving up the meaningless search for the self through attachment to material acquisitions, we should all strive towards our true identity as a spirit soul, which is eternal, full of bliss, and full of knowledge.

In conclusion, how can we know when we are truly becoming successful on the spiritual path? What is the “bling” of the spiritually rich?

Radhanath Swami, a modern day spiritual master in the bhakti-yoga tradition, has established a benchmark for recognizing spiritual success in our life: “If you want to find out how rich you are, then find out how many things you have that money cannot buy. That is real wealth.” 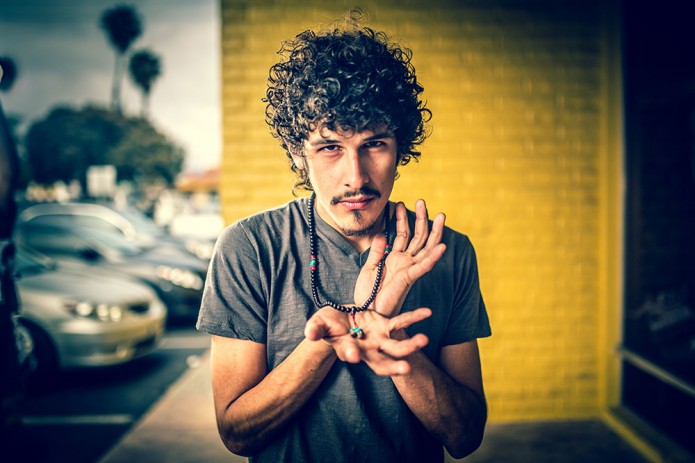 Hi. This is Mahat, the editor. In this issue of the 16Rounds magazine we used one model to illustrate all articles but this one. Here we broke the rule because while photo-shooting in Pacific Beach, San Diego, we ran into some peeps who wanted to model just for fun. Of several different shots, we ended up using this one.