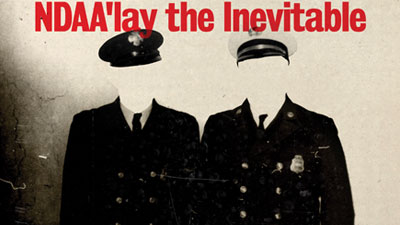 Federal Courts Give Citizens a Few More Days of Freedom

“At 11.40 pm (ship’s time), lookout Frederick Fleet spotted an iceberg immediately ahead of Titanic and alerted the bridge. First Officer William Murdoch ordered the ship to be steered around the obstacle and the engines to be put in reverse, but it was too late; the starboard side of Titanic struck the iceberg, creating a series of holes below the waterline. Five of the ship’s watertight compartments were breached. It soon became clear that the ship was doomed, as she could not survive more than four compartments being flooded. Titanic began sinking bow-first, with water spilling from compartment to compartment as her angle in the water became steeper.” – A quote from Robert Ballard’s The Discovery of the Titanic.

“Today I have signed into law H.R. 1540, the National Defense Authorization Act for Fiscal Year 2012. I have signed the Act chiefly because it authorizes funding for the defense of the United States and its interests abroad, crucial services for service members and their families, and vital national security programs that must be renewed. In hundreds of separate sections totaling over five-hundred pages, the Act also contains critical administration initiatives to control the spiraling health care costs of the Department of Defense, to develop counterterrorism initiatives abroad, to build the security capacity of key partners, to modernize the force, and to boost the efficiency and effectiveness of military operations worldwide.” – The opening paragraph of President Obama’s signing statement regarding the NDAA. Ladies and gentlemen, welcome aboard the Titanic.

“The statute at issue places the public at undue risk of having their speech chilled for the purported protection from al-Qaeda, the Taliban, and foreign terrorist organizations. The vagueness of Section 1021 does not allow the average citizen, or even the government itself, to understand with the type of definiteness to which our citizens are entitled, or what conduct comes within its scope. Please read Section 1021 as ‘That part says that the government can arrest whoever they want, whenever they want just because.’”

The last quote was from the opinion of U.S. District Judge Katherine Forrest. A crew of seven notable, civil dissidents, Noam Chomsky among them, called the Federal Government’s bluff and sued them on grounds that the NDAA, and particularly this troublesome Section 1021, is unconstitutional. They won, this time. But the damage has already been done. It was three hours after the iceberg gouged its hull that the Titanic sunk; maybe this country has three years.

The NDAA is the most recent but surely not the last acrimonious acronym designed to complete the de-Americanization of America. It was the positive strep test confirming the presence of unwanted things our sore throat, gushing nose and fever were already indicating. But despite the fact that it does nothing short of create a police state where everybody’s previously inalienable rights can be shunted at any time for whatever reason; still, you will hear a lot more griping about gays losing their tax breaks or women who can’t get birth control than you will about all of us being an ill-advised Google away from indefinite detainment.

This NDAA is the type of legislation whose potential to effect your life is directly correlated to how much you already know about it. I only know that farm subsidies pass every year; for what, where, and how much is the concern of people living in states with names that end in ‘ansas.’ The types of people the NDAA authorizes detention of are exactly the types of people who already know everything I could say about its political, social and cultural implications. Conversely, the people whom think NDAA a typo meant to reference a prominent intercollegiate athletics organization are already locked up. I’m not one to pander or patronize; so, please forgive me for not taking the time to explain times tables to either calculus students or kindergarteners.

However, I would like those familiar with asymptotes to consider we’re all in prison already. If we are living in a place where such a bill as the NDAA could even be considered publicly, let alone passed, then does it matter which side of the incarceration line we’re on? The material circumstance of our bodies may not indicate detainment, but the minds of most Americans are indeed; they were submitted to hand cuffs and jail cells made of bread, circus, and Starbucks years ago.

I once heard a Vaisnava monk characterize government more aptly in one sentence than all the Locke’s, Nietzsche’s and Stephanopoulos’ could ever hope to in a thousand election cycles. It was the kind of profundity that could only come from an intelligence completely removed from the situation at hand, like a mom talking about her neighbor’s babysitter. “Government’s are what people use to decide who owns what,” he said with the nonchalant attitude that we might have when buying toothpaste.

As a monk, his sole concern is the soul, which has nothing to do with the body and its material circumstance. As C.S. Lewis put it, we don’t have souls. We are souls, we have bodies. The Bhagavad-gita As It Is, the Bible for a Vaisnava monk, explains that the soul changes bodies like we change clothes each day. That means all the stuff that comes along with the body (home, car, bank account, caucus, et cetera) change too. So what’s the use of being so concerned with them?

Animal life, the Bhagavad-gita calls it. Eating, sleeping, mating, defending, these are the only concerns of cats, dogs, and increasingly, Americans. Dave Matthews had a redeeming song called “Ants Marching” that ironically the ants loved. Practically, what is the difference between the ants faithfully moving this grain of sand from here to there day after day and the man or woman whom moves this copy to that office pay period after pay period?

Such a limited scope of endeavor is true imprisonment. Unable to act on a plane beyond the temporary, we are constantly frustrated by our circumstances when we are concerned merely with things on the platform of the body. Can our car ever be new enough? Is our grass green enough? Our iPad sleek enough? Concerning ourselves with matters of the soul means developing a consciousness that becomes impervious to external agitation. Human life begins only when our desires for the procurement of stuff have ended.

Nelson Mandela was a political prisoner in his homeland of South Africa for twenty-seven years. Four years after his release, he was elected president of the country. When we rise above the concern for our immediate material circumstance, we can perceive the world to be about more than who owns what.

Devin about himself: "Grew up in Monroe, NC. Soccer was my life until I discovered wine and women in college. I worked 80hrs a week during my summers as a door-to-door salesman so I could party 80 hours a week while I was in school at NCSU. In between sips and rips I read philosophy. Upon graduating I decided to move from Americas 'best place to live,' Raleigh NC, to Detroit MI; whose noteriety needs no qualifier. It is there in the buckle of the Rust Belt that I met the Hare Krishnas, and was presented with a philosophy that demanded sobriety for comprehension. It is my struggle to both decipher and disseminate this ancient Vedic wisdom that has me writing for 16Rounds."