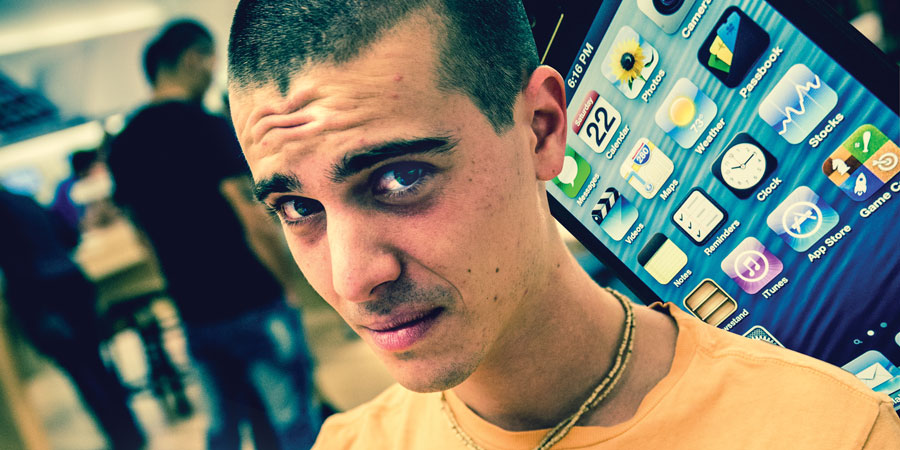 A Spiritual Perspective On iPhone 5

What is so cool about iPhone 5? Is it its, now even larger, retina display? The fact that it is thiner and lighter than iPhone 4? Faster wireless technology? The new A6 chip? Or that iPhone 5 is a miserable piece of poop in comparison to the iPhone 6?

Hang on! Are you reading this on an iPhone? Cool.

Gadgets, World, and Us

To accurately understand an action, we necessarily need to analyze its consequences. No thing exists independently. The quality of the existence of a thing is valued in accord with the thing’s relationship with the world, with its influence on the world, the reactions it triggers, etc.

Even though the latest and coolest technological inventions springing from the restless human mind are in many ways useful and seemingly make life better, we can not and should not stop the analysis process there. The cool technological gadgets are possible and produced only because of the existence of ignoble and dangerous industrial and economic systems which we have made ourselves dependent on and which are unsustainable. You know all about it. If you don’t, then you must have had your head in the sand (or some other dark place) for quite some time and now have lots of catching up to do.

Coltan is a rare and expensive metal that is necessary for producing electronic devices such as cellphones. This metal is mostly mined in the poor countries of Africa. Mining of coltan in Africa is directly a cause of untold miseries for African natives. Some journalists, like Austrian Klaus Werner, have documented links between multinational companies, such as Bayer for example, and the unethical and even illegal coltan mining and trafficking.

Who says that technological advancement is an advancement?! By what philosophical inquiry have we concluded that? The lack of this questioning is what I perceive to be an issue. I am of the opinion that modern people have gotten good at doing things right, but have done a terrible job of doing the right things.

Modern people are experts at technology, producing things such as computers, elaborate and efficient communication networks, vehicles for quick and comfortable transportation, etc. The plethora of arrangements for physical comfort of people in their artificially created habitats, for example, is quite impressive.

People go about their lives following the social norms, such as getting educated, finding a job, taking out a mortgage, getting a poodle, etc., and thus to a certain degree they do things right, but they have no clue as to whether they are doing the right things, and they don’t seem terribly bothered by such ignorance. They don’t know and often don’t care to identify the right direction to focus their lives on, to climb the right wall. Often those who choose a wall to climb do not bother to evaluate the wisdom of that choice. Whatever the social norms are, folks just follow.

"When I grow up, I will climb the ladder of technological advancement!"

Inconsistencies In the Value System

For the most part, modern educational institutions teach the youth that life, the universe, and everything else is in essence a conglomeration of physical particles, while emotions, ideas, etc., are products of chemical interactions in our brains. At the same time, the potentially rational people are taught that it is their right to pursue ideas such as equality. Do such individuals ever think what it is that objectively makes us all equal, considering that physically we are all different? No two individuals on the planet are physically equal in even a few aspects, let alone equal in all aspects. No two people are equally tall, smart, educated, athletic, etc. So, what is it that makes us all equal? Equality is a religious and spiritual claim. Without bringing in metaphysics, it is impossible to objectively establish equality. Spirituality is the only proper basis for establishing equality. Yet we have allowed our society to toss spirituality out the window or reduce it to private life; which, in the materialistic opinion, has no objective standing in public life. Because folks are so concerned about doing things right, they have forgotten to pursue the right things or, as mentioned above, even to try to determine a purpose worth endeavoring for by a solid philosophical evaluation. Thus they don’t notice the inconsistencies in their value system, and when they do notice the inconsistencies, they just don’t care. After all, to modern people philosophy is a matter of private choice, not a thing we as a society should bother ourselves and others with. It is a thing we do for fun, entertainment. If it isn’t entertaining, the fellas drop it.

Historically we find that the only restraints on selfishness and vanity were spiritual and religious. Besides religion/spirituality no one really ever managed to define, or quantify in measurable terms, this vanity, which is otherwise an abstract idea. Hardly anyone even recognized the need to deal with the issues of vanity on a society-wide scale. It is “liberal” academia that blew that off, and now they are all crying about the runaway consumerism. Just see the inconsistency!

Modern “liberal” academia and the government have segregated religious/spiritual life from the law and other such secular sections of our society. They have made spiritual ideas private, personal views with no objective status. They think that if they get rid of God and soul, people will naturally gravitate toward liberal humanism. However, we see that people are rather stampeding into shameless consumerism. Let people do what they want by doing away with moral impositions, and they will open shopping malls!

Fix It. Don’t Throw It Out

Religious communities have done their share of imposing irrational values on society, but that’s not a valid excuse to go to the other extreme and toss the baby out with the bath water. If one’s eye is diseased, the solution is not to pluck it out. It should rather be healed. Similarly, I propose, since religion went weird in the application of otherwise important principles, we should not cut it out, but should rather heal it, fix it, and do it right. Otherwise some of the core aspects of a civilized society, including such sophisticated ideas as equality, will also have to be cut out. But modern consumer prostitutes and the like don’t seem to be bothered by such inconsistencies. Thus folks continue to perfect the art of doing things right while neglecting to do the right things.

"You are sick. We are going to kill you. But don't worry, you are not going to feel anything."

Modern society is like a headless body, a body that is stumbling around, concerning itself with the quality of its walking, running, jumping, and squatting, fully enamored with its ability to execute and improve such functions. But because of not having a head, the body cannot determine a meaningful course of action fortified by philosophical coherence.

Before rushing to climb, we should first identify the wall worth climbing. Only at that time will we be able to tell whether iPhone 5, and everything else, is truly cool.

Spirituality Is a Science