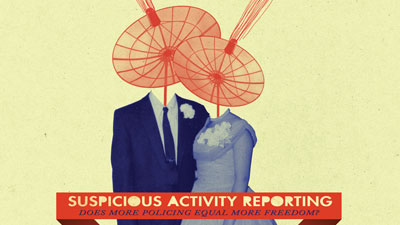 Early in the month of March, 2012, the State of West Virginia published a peculiar mobile phone application – one that you can use to report to Homeland Security, and other governmental policing institutions, any activity that you consider “suspicious.” The app is free and can be downloaded, among other places, from the Apple’s app store. Thanks to this app, now American citizens can discreetly take pictures of other Americans and report them to the officials.

Reactions to this app have been mixed. Some Americans find the introduction of the app liberating while others think it will compromise American liberty.

Personally I am not a pacifist as I do think that force and violence have their place in civilized societies. Force and violence can be used and misused. Certain purely immoral and plain wrong elements can at times only be dealt with violence. Sometimes the only way to protect the innocent is by use of force. I am all for locking up the incorrigible criminals. I do think that those who are habituated to violating the innocent in favor of personal profits should not be allowed unrestricted freedom of movement and expression. So force and violence have their pure, pristine, good form. However, maintaining a clear distinction between the good force and the bad, unwanted force can often prove to be a difficult task. I have some serious concerns about this new mobile phone application.

To ensure that all citizens are treated equally, societies usually establish a law system. The problem with this is that the law needs to be very comprehensive in order to cover all possibilities, even the minutest ones, of injustice. However, as such law is enacted, it tends to become stiff, not flexible. Thus the court of law is not a court of justice – it is simply the court of law. The lawyers are the folks who don’t fight for justice, but for the interpretation of the law. Just recently I heard a joke where a person asked a lawyer how much is two plus two. The lawyer answered, “How much do you want it to be?” Conclusion is that the law does not equal justice and that it tends to be stiff. For this reason everyone, and I do mean everyone, sooner or later, brakes the law and in many instances such breakage of law is human and just. The problem is that such occurrences could be interpreted as unjust. Thus to place the power of policing in the hands of nearly all the citizens, considering that nowadays almost everyone has a mobile phone, can easily be more of a nuisance, a freedom constrictor, rather than a freedom protecting element.

Every society needs to be governed. Without governance the strong hurt the weak, making it impossible to have social harmony. So I am all for governance. However, I am only for governance by people who are pure and purged of all materialistic motivations. For the life of me I cannot trust governing individuals who are not spiritually accomplished. If they are not spiritually accomplished, they must have a material concept of life which necessitates the understanding that the self is matter and that therefore material accomplishments are of the highest personal interest. This understanding gives individuals the psychological right to be abusive materialists of varying degrees.

Looking at ancient and modern history, we see that the few who govern, unless they are spiritually accomplished, tend to be strongly attached to the power which comes with governance. I can hardly recall any government who renounced governance at the bidding of the governed people when the government did not deserve to govern any more. They all tried to protect their positions, often even by brute force. Thus the few, the government, by using police and army, physically hurt the many, the majority and the governed.

The many cannot be controlled by brute force forever. They can only be kept in cages they don’t see. So the way the few govern and control the many is by presenting themselves to the many as their well-wishers and protectors. The app under discussion accomplishes just that: It tells the many that the few are their guardian angels ready to go any lengths for the safety of the many. Thus the many become obedient to the few.

If the few have the wielding power of enforcement invested by the many, who is deputed to monitor and punish the few should they break the laws? Not that only the many should be made to follow the law diligently; the few who are elected for the purpose of serving the many should have an even higher standard of integrity to maintain because their influence is entrusted by the people for their own welfare.

"This guy looks unusual. Let me report him."

THE MANY POLICE THEMSELVES

A few can never control the many. The few need help of the many to control the many. Production of the “Suspicious Activity Reporting” application beautifully serves this purpose. Once the many are accustomed to police the many, even if the many notice when the governing few become unjust and immoral, individuals of the many will fear contradicting the laws established by the few in the favor of the few because they may be abused by the others among the many whom may not be willing to contradict the abusive few. We have seen this in the communist regime-controlled countries of the not too far past. George Orwell extensively wrote about this danger in his work 1984.

I remember flying shortly after the disastrous 9/11 incident from India, returning from a spiritual pilgrimage trip back to the States. After being jammed packed in the tiny economy seat for nearly twenty hours, we finally landed at an airport in the States. Once we were off the plane and in a terminal, I put my suitcase down and started to walk, stretch my legs and thus save my life. I was moving away by ten yards or so, back and forth from my suitcase, just to be interrupted by a freaked out American patriot’s yelling. He was literally yelling at me, threatening to call police if I didn’t stay tight with my heavy suitcase. Security is fine, but this was much more than security – it was paranoia.

“Terror, terrorist, terrorism, Muslims, Al-Qaeda, blah, blah, blah…” these are the mantras emanated from the main stream media sources, keeping the many afraid of the many, submissive to and trusting the few. Long live the paranoia.

The following is a comment, by a reader (www.popsci.com/users/ednylaw), to an online article about this app.

Seems to me this has constitutional violations written all over it. While private parties are not subject to 4th Amendment requirements, I can see how this (though probably not with the current Supreme Court, but at least in some of the circuit courts) may lead to a private party being treated as a state actor, thus subjecting them to constitutional requirements. This app is tantamount to police enlisting the help of private citizens to get around warrant requirements. I feel as though we’re getting closer and closer to a police state.

Our society’s secularity has so drastically divorced itself from even the most basic spiritual elements and values that my proposed alternative will, to many, sound too far out. If I had a chance to constitute a state, I would make sure that certain Vedic elements be enforced. One Vedic requirement for anyone taking the position of governance is the compulsory and complete renunciation of the governmental post and all of one’s material property by the age of fifty. In Vedic times, people in governing positions would at the age of fifty take to the life of renunciation. They would leave everything, and I mean everything, to become wandering mendicants. Thus they would perfect their lives by renouncing material attachments and completely engaging themselves in spiritual cultivation and propagation of spiritual values. Since the rulers knew they could not hold on to their material assets, throughout their political term they would not bother becoming attached to the material assets and would thus feel free to fully give themselves in service to the populace.

I have more concerns about the “Suspicious Activity Reporting” application, but I would love to hear your comments. I am quite democratic when it comes to communication and views-exchange. I think it is very important to look at the same object from different people’s perspectives. Thus your comments are much appreciated. To comment, please go to www.16rounds.com.

In the iTune’s store, on the page where the application is being distributed, there are three comments right now. They all seem to share similar concerns. Here they are:

Disgusting (by Anon96): This is disgusting. Just another way for the police to spy on you.

We live in the USSR now? (by WV American): As a West Virginian I am deeply embarrassed by this app. Governor Earl Ray Tomblin and Division of Homeland Security Director Jimmy Gianato clearly intend to foster a Soviet-style informant culture in our state, and I’m sure other states will then follow like sheep. This app is disgusting and disgraceful and contrary to American values. I call on Apple to pull it from circulation immediately.