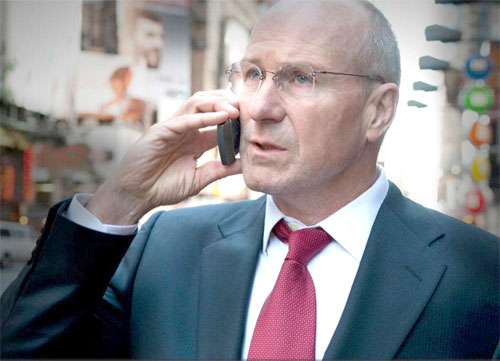 Henry Paulson from the HBO drama Too Big to Fail

The 2011 HBO film drama Too Big to Fail covered the September 2008 American financial meltdown as an unforeseen doomsday scenario involving the leading brass of United States Treasury as they scramble to save the corporate Titans on Wall Street. Secretary of Treasury Henry Paulson and Ben Bernanke steer our nation away from financial collapse by getting Congress and the American people to bail out large banks.  Paulson is a tormented character doing what’s best based the information in an absolving narrative that reinforces that big business  were forced to take taxpayers money to keep the system creaking along. Too Big to Fail is the name given to surviving few financial leviathans stitched together from the ashes of the late Bear Sterns, Lehman Brothers and Freddie and Fanny.

Hold on one second dude but I’m having a cultural-historical hot flash regarding the accepted idea of Too Big to Fail. Wasn’t  the Titanic the ship too big to sink? The Roman Empire too sprawling to conquer? Goliath far too powerful for David? The magnificent dinosaurs and the giant in Jack and the Bean Stalk? What exactly can we learn from the lessons of the past, the Bigger the harder They fail? Its human arrogance to his creations are infallible. What happened to Icarus’s hot wing’s toe with the sun?  Lehman, Bear, Mac and May were all massive institutions rotten to the core by risky speculative gambles. It seems that nothing human pride always comes before the fall and nothing is too big to fail.  Only advertiser that cater to insecure men consistently harp that bigger actually means better.

Michael Moore’s 2010 documentary “Capitalism a Love Story,” exposes the government bailout of Wall Street as a breach of democracy, manipulative scare tactics, only possible through eroded government regulation that got the bottom 90% to swallow the toxic bets of the super rich investment bankers. Although HBO drama tries to separate the treasury department from business interest, Henry Paulson was former CEO of Goldman Sachs and his cronies were wrapped in the loving embrace of Wall Street. These appointed public servants were sleeper cells for the big business that road the profit train through tax cuts and deregulation. Banks threw cheap home loans at the American people creating the illusion of financial boom and passing the risk to insurers like AIG. In essence the unscrupulous government regulators allowed Wall Street bankers to make millions through irresponsible lending and in the closing hours of the Bush Regime pretended catastrophe randomly struck, and  unsuspecting American people had to assume responsibility. Paulson’s as a puppet of Goldman Sachs saved the banking industry from owning up to their shady business deals by begging congress to assume responsibility. In HBO’s drama he begs the then speaker of the house Nancy Pelosi to enable the bailout. Paulson the true champion of big business, and costumed regulator brilliantly continued the function of brilliant CEO to double the assets of Goldman Sachs, eliminate competition like Lehman and get the American people to swallow 700 billion in debt.  Goldman Sachs came out of the crash with record profits and paid their masterminds tens of millions in bonuses. The movie contended they would lose their best and  brightest through “brain drainage” if they didn’t pay them disgusting amounts of money. Paulson’s only briefly courted the real problem briefly saying that no one on Wall Street questioned their toxic business practices because they were making too much money.

The reality of this movie ignored the real problem. The financial meltdown occurred because of unregulated corporate capitalism and its inherent toxicity to this country the world. There is no free market when government enables corporations to pillage the dwindling resources of the planet so the top 10 percent can own more than bottom half.  The reality is that runaway greed and economic growth are unsustainable on a planet with 7 billion people and rapidly exhausting resources. The rich back giant self-serving monsters in the forms of corporations whose mission is to grow voraciously in the continuous re-concentration of the earth’s wealth in the hands a few. The unregulated corporate capitalism was the cause of the financial meltdown as defined by predictable nature; as stated in the movie, “now a handful of banks own 70% of all assets in this country and the world.” Goldman Sachs and its allies orchestrated the crisis as a ruse to destabilize their competitors and devour their shares. They preyed on the ignorance of the American people, manipulating us through the media and advertising to believe it came out of left field.  With the political change immanent and our representatives in Washington worried about getting reelected, Henry Paulson and his comrades at Goldman picked their opportune moment to bring pressure for action to the doorstep of the American people. We were bamboozled into bailing the banks from the toxic waste dump they had amassed behind closed doors and scared into action hinged on the threat that economic collapse.  The Bush regime was ground zero for some of the greatest breeches of public trust in American history.  Thomas Jefferson and Adam Smith would be flabbergasted at this Big Fail on Regulation, democratic trust, responsible business practices. However company men like Henry Paulson, Lloyd Blankfein and their cronies will remain devoted to their objectives 1) To make as much money as possible no matter the social, environmental, or economic collateral 2) To grow inevitably and annihilate competitors by any means necessary, illegal or loop-holed. 3) Lastly to the American people and human beings only as consumers, borrowers, debtors, things to manipulated and exploit to generate more money for themselves and super rich buddies.

The moral that echoes this pillage of the American Public by the greed of Big Business and their partners in congress, has been said time and time again by many religions and cultures. “For the love of money is a root of all kinds of evil” Timothy 6:10, King James Bible

The Nectar of Devotion