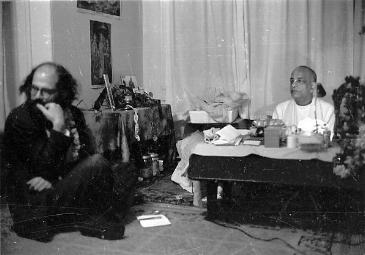 Irwin Allen Ginsberg (1926–1997) was an American poet. Ginsberg is best known for the poem “Howl” (1956), celebrating his friends who were members of the Beat Generation and attacking what he saw as the destructive forces of materialism and conformity in the United States. –Wikipedia

A.C. Bhaktivedanta Swami Prabhupada (1896–1977) was a Vaishnava Hindu teacher and the founder-acharya of the International Society for Krishna Consciousness (ISKCON), or more commonly known as the “Hare Krishna Movement”. –Wikipedia

A conversation between Allen Ginsberg and His Divine Grace A.C. Bhaktivedanta Swami Prabhupada

Allen Ginsberg: Your Divine Grace, I’m trying to imagine ways by which this spiritual movement of yours can become more and more widespread and more and more acceptable to people. I don’t know how. It’s difficult for me to conceive that everybody in America will …

Srila Prabhupada: Nothing is accepted by everybody.

Allen Ginsberg: Your Divine Grace, I’m trying to imagine ways by which this spiritual movement of yours can become more and more widespread and more and more acceptable to people. I don’t know how. It’s difficult for me to conceive that everybody in America will …

Srila Prabhupada: Nothing is accepted by everybody.

Allen Ginsberg: I mean, it’s hard to imagine a vast number of modern Americans living a life based on ancient Sanskrit yoga scriptures, totally vegetarian food, and many other regulations. Many of us have been thinking, what form of a spiritual practice, what form of simple meditation exercises, could be set forth in America that could be adopted by a great, great, great, great many people on a large scale? We haven’t solved the problem.
One thing I’ve noticed is that your Krishna temples have spread quite a bit and are firmly rooted and solidly based. There are a number of them now. So that really is a very solid root. And I think that will continue.

Allen Ginsberg: But I’m wondering, what’s the future of a religious observance so technical as this, so complicated as this? For instance, your movement requires so much sophistication in terms of diet. I mean, no flesh-eating, plus the fasting twice a month. And so much sophistication in terms of daily ritual. The whole thing that you’ve been teaching—how far can that spread by its very complexity? 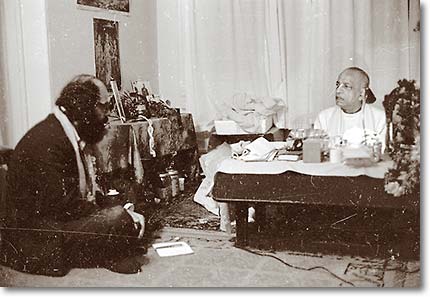 Allen Ginsberg: Well, the orthodox Jews have a very heavy, complicated, moment-by-moment ritual daily existence for that same purpose. It is to keep them conscious of their religious nature. And that has maintained a small group of Jews over the centuries as an integral unit, but has tended to disappear in the later generations now, because modern life does not allow that much Krishna consciousness or Jewish consciousness or religious consciousness and attention, act by act throughout the day. So my question is, how far can total Krishna devotion—act by act, all day—spread? How many people can that encompass in a place like America? Or are you intending only to get a few devotees, like several hundred or a thousand who will be solid and permanent?

Srila Prabhupada: Yes, that is my program, because Krishna consciousness is not possible for everyone. In the Bhagavad-gita we learn, bahunam janmanam ante: Only after many, many births can a person come to this full understanding. So at any one point in time, it is not possible that a mass of people, a large number of people, will be able to fully grasp it. You see? Bahu-nam janmanam ante jnanavan mam prapadyate: “After many births, one who is at last in knowledge comes to Me.” Elsewhere in the Bhagavad-gita we find manushyanam sahasreshu: Out of millions of people, just one may be inquiring how to liberate himself from this material world. And out of millions of such liberated persons, just one may actually understand Krishna.

So ordinarily, understanding Krishna is not a very easy thing. That is why, when Krishna incarnated as Caitanya Mahaprabhu, five hundred years ago, He was so munificent that He gave us an easy process, the chanting of Krishna’s names. Otherwise, Krishna consciousness is not easy, because insofar as the Absolute Truth is concerned, Krishna is the last word, and generally, people are just like animals, absorbed in this temporary material world in terms of eating, sleeping, mating, and defending.

Out of many such materially illusioned persons, one becomes interested in spiritual teachings. Now, most persons—if they’re at all attracted to the teachings—are attracted to the ritualistic ceremonies recommended there for improving their economic condition. You see? People take up religion, or dharma, with the motive of artha—improving their economic position. Artha means money, material prosperity.

Why artha? Why do you want money? For kama, your futile attempt to satisfy these temporary, illusory senses. And when you become frustrated in sense gratification, then you seek moksha, or liberation, supposedly merging with the Absolute. These four are going on: dharma, artha, kama, moksha – materialistic religiosity, material prosperity, sensual gratification, and liberation.

But the Vedic texts, such as Srimad-Bhagavatam, say that dharma is not meant for acquiring money, and that money is not meant for satisfying the senses, and that sense gratification should be accepted simply to maintain the body. That’s all.

Allen Ginsberg: Your plan in America, then, is to set up centers so that those who are that concerned can pursue their studies and devote themselves to the practice?

Srila Prabhupada: Personally, I have no ambition. But it is the mission of human life to come to this point. So there must at least be some center or institution that gives people this idea.

Of course, it is not that everyone will come. For instance, during my studies, at the University of Calcutta a professor’s salary was thirteen or fourteen hundred dollars a month. And yet there were comparatively few students, and the fees collected from each student were at most thirty-six dollars per month. You see? But still, the classes had to be maintained, because the ideal must be there.

So our mission is the intelligent persons of the world must know that the aim of human life is not simply seeking after sensual gratification. As the Srimad-Bhagavatam says, jivasya tattva-jijnasa: Human life is meant for inquiring about the ultimate truth. That is the same thing that Vedanta had said before, because the Srimad- Bhagavatam is nothing but the explanation of Vedanta. So Vedanta says, athato brahma-jijnasa: This human form of life is meant for inquiring about Brahman, the Supreme Spirit. Atha means “now,” and atha means “after,” signifying that now, after passing through untold lower species of life, when the soul at last rises to the level of civilized human life, at that time his business is to inquire about the Absolute Truth.

Yet nowadays, thanks to so-called educators and leaders, people are being misled. Instead of taking people to the highest, topmost stage—to the platform of inquiring about the Absolute—these misleaders are merely giving facilities for how you can satisfy your senses nicely: eat, sleep, mate, and defend.

Allen Ginsberg: Now in America there is a feeling of spiritual bankruptcy, due to our overemphasis of sense satisfaction.

Many agree that our civilization has come to the end of its possibilities materially. Many, then, seem to be looking for an alternative to material extension.

Srila Prabhupada: Yes, they should inquire about the Absolute Truth.

When others are enjoying for you