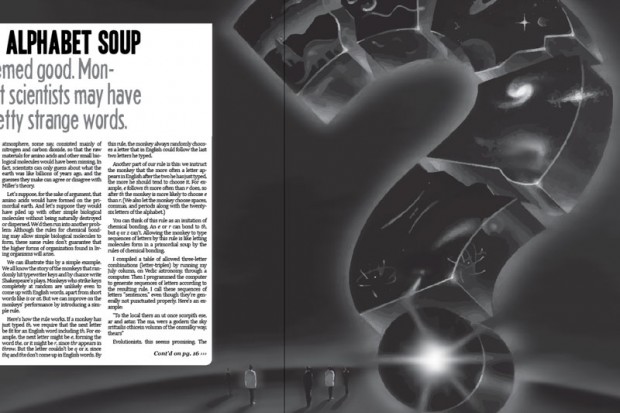 Thirty-eight years ago what is arguably the greatest mystery ever puzzled over by scientists—the origin of life—seemed virtually solved by a single simple experiment.” This is how the February 1991 issue of Scientific American begins a review of theories of the origin of life.

The simple experiment, carried out by a University of Chicago graduate student named Stanley Miller, involved placing a mixture of methane, ammonia, hydrogen, and water in a sealed flask and zapping it with electrical sparks. The result was a tarry goo containing amino acids, the building blocks of the proteins found in living organisms.

To Miller it seemed but a few inevitable evolutionary steps from this primordial soup of water and biomolecules to the first living organisms. And from that day, college science students have been taught that science has explained life’s origin. Indeed, many students are under the impression that life itself has been synthesized in a test tube. Unfortunately, as the article in Scientific American points out, scientists are far from understanding life’s origins.

First of all, some scientists have argued that the conditions on the primordial earth would have been unsuitable for amino acids to form in. Miller’s theory calls for a reducing atmosphere rich in hydrogen-based gases such as methane and ammonia. But the primordial atmosphere, some say, consisted mainly of nitrogen and carbon dioxide, so that the raw materials for amino acids and other small biological molecules would have been missing. In fact, scientists can only guess about what the earth was like billions of years ago, and the guesses they make can agree or disagree with Miller’s theory.

Let’s suppose, for the sake of argument, that amino acids would have formed on the primordial earth. And let’s suppose they would have piled up with other simple biological molecules without being naturally destroyed or dispersed. We’d then run into another problem: Although the rules for chemical bonding may allow simple biological molecules to form, these same rules don’t guarantee that the higher forms of organization found in living organisms will arise.

We can illustrate this by a simple example. We all know the story of the monkeys that randomly hit typewriter keys and by chance write Shakespeare’s plays. Monkeys who strike keys completely at random are unlikely even to come up with English words, apart from short words like is or at. But we can improve on the monkeys’ performance by introducing a simple rule.

Here’s how the rule works. If a monkey has just typed th, we require that the next letter be fit for an English word including th. For example, the next letter might be e, forming the word the, or it might be r, since thr appears in throw. But the letter couldn’t be q or x, since thq and thx don’t come up in English words. By this rule, the monkey always randomly chooses a letter that in English could follow the last two letters he typed.

Another part of our rule is this: we instruct the monkey that the more often a letter appears in English after the two he has just typed, the more he should tend to choose it. For example, e follows th more often than r does, so after th the monkey is more likely to choose e than r. (We also let the monkey choose spaces, commas, and periods along with the twenty-six letters of the alphabet.)

I compiled a table of allowed three-letter combinations (letter-triples) by running my July column, on Vedic astronomy, through a computer. Then I programmed the computer to generate sequences of letters according to the resulting rule. I call these sequences of letters “sentences,” even though they’re generally not punctuated properly. Here’s an example:

“To the local thers an ut once scorpith ese, ar and astar. The ma, wers a godern the sky srittailis othicein volumn of the onsmilky way, thears”

Evolutionists, this seems promising. The computer-monkey is coming up with many English words, and some even seem to convey a faint glimmer of meaning. One can imagine that in just a few evolutionary steps the computer will begin to express profound thoughts—with impeccable English grammar.

But unfortunately if we read a few pages of this stuff we find no signs of emerging complex order. We find short English words, often relating to astronomy, since the letter-bonding rule comes from such words. But there are no signs of the more complex order needed for the grammatical expression of thoughts. In the bonding rule, the information for these complex patterns is simply not there.

Biological chemistry puts before us a similar problem. By the rules of chemical bonding, atoms of hydrogen, oxygen, carbon, and nitrogen will tend to form amino acids and similar compounds under appropriate conditions. But these rules are not enough to bring together the highly complex structures found in even the simplest living cells.

Of course, our rule for generating letter sequences doesn’t take into account Darwinian evolution by mutation and natural selection. Many scientists regard this process as essential for the development of complex order. So it’s not surprising, one might say, that our simple rule cannot produce such order.

In living organisms, self-reproduction is a dauntingly complex process involving proteins, deoxyribonucleic-acid (DNA) and ribonucleic acid (RNA). If Darwinian evolution can’t take place until such a complex system is operating, scientists are at a loss to explain how that complex system has come about.

The only hope has been to suppose that the first self-reproducing system was much simpler than the simplest of today’s living cells. If somehow a single molecule could reproduce itself under suitable conditions, then perhaps it could evolve, develop liaisons with other molecules, and eventually give rise to the kind of organisms that exist today.

But the RNA-world models have problems. One is that RNA would seem unlikely to form on the prebiotic primordial earth. Another is that RNA cannot readily make new copies of itself in the laboratory without a great deal of help from scientists. (For one thing, RNA replication calls for pure conditions that can be provided in a laboratory but would not be expected in nature.)

Still, let’s suppose that a self-reproducing molecule (which might or might not be RNA) did arise on the primordial earth. What might we expect it to evolve into? To gain some insight into this, I introduced evolution into the computer-monkey model.

Darwinian evolution rests on the idea of survival of the fittest, or natural selection. So I defined the fitness of a monkey-generated “sentence” by looking at how often the letter-triples of that sentence appear in English. If a sentence has many frequent triples (like the or ing), it has high fitness; if it has few, it has low fitness. So if we replace infrequent or nonexistent triples (like inz) with common ones (like ing), we increase the sentence’s fitness. Essentially, the closer a sentence gets to a real English sentence, the more fit it is.

I used survival of the fittest to simulate how evolution might take place in a population of twenty monkey-generated sentences. For a sentence to “give birth,” I would simply add to the population a copy of the sentence that might differ by one letter. The copy would be the offspring, and the differing letter would correspond to a random mutation.

I divided time into generations. During each generation, the ten fittest sentences in the population would each give birth to ten offspring. At the same time, I cruelly killed off the ten sentences of least fitness, so that the fit sentences multiplied at the expense of the less fit ones. This was survival of the fittest.

I began with a population of twenty copies of the sentence “godern the sky srittailis othicein volumn of the onsmilky way,” generated by the letter-bonding rule. Here is how the fittest sentence in the population changed at intervals of 200 generations:

We see that the sentence is indeed evolving. But unfortunately it’s not evolving into anything meaningful. This process of evolution is simply not able to generate the complex patterns of actual English speech.

My point is this: Assuming that self-replicating molecules could exist on a primordial earth, where can we expect their evolution to go? Nowhere meaningful. Such molecules may indeed evolve and grow molecularly more fit, but there is no reason to think they will evolve into living cells.

Molecular fitness will have something to do with how strongly a molecule’s bonds hold it together and how well the molecule can catalyze its own replication. This kind of fitness may increase through Darwinian evolution. But there’s no reason to think that anything will ever emerge from this, other than modified self-replicating molecules of the same type. There’s no reason to suppose that the self-reproducing molecules will ever give rise to something completely different, such as an elaborate system of reproductive machinery based on DNA, RNA, enzymes, and the famous genetic code.

My purpose in giving these examples from sequences of letters is not to claim they prove anything about the origin of life. Rather, I’m simply illustrating some of the obstacles that theories of life’s origin face. We can talk about these obstacles in purely chemical terms. Such discussions are necessarily technical.

So, again, here are the two obstacles we have discussed: (1) Natural rules for bonding between atoms may give rise to simple biological molecules under special circumstances (as in Miller’s experiment), but they can’t give rise to the complex structures needed for organisms to grow and reproduce. (2) If some hypothetical molecules were able to jump start their own replication, they might evolve by Darwinian natural selection and random variation. But no one has given any solid reason to suppose they would evolve into anything more than better self-replicating molecules. And, of course, it has not been shown that prebiotic molecular self-replication could happen.

In years since Miller’s famous experiment, scientists have come up with many complicated theories about how life might have originated, but they have failed to overcome these and other fundamental obstacles. Miller himself tends to disapprove of the futile speculations of the theorists. He argues that what the origin-of-life field needs is good experiments that actually demonstrate how life got started. But such experiments are not easy to devise. “I come up with a dozen ideas a day,” Miller says, pausing to reflect, “and I usually discard the whole dozen.”