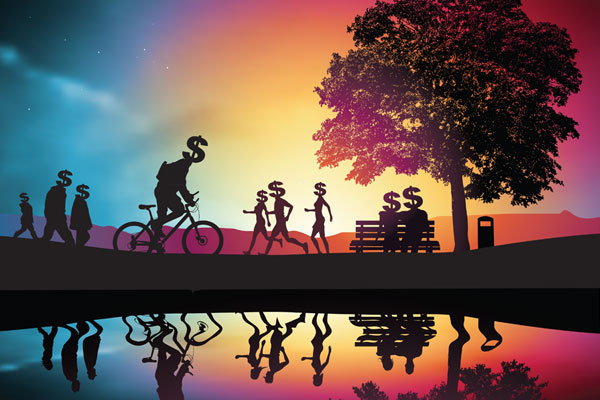 "We have become indentured servants for the Federal Reserve and most don't know it."

Free markets, subsidies, taxation, rise and subsequent fall of the economy, and inflation—sound like a familiar progression? Crack open any American history book and you see this theme threaded throughout. If we go back in time we see the same progression in Roman history. The emperor’s quest for political dominion gave rise to deceptive and duplicitous political policies in order to secure such power. The autonomy of the Roman people decreased along with their political sovereignty. This point can easily be deduced by us now, but at the time the Roman citizens had no idea their society would inevitably come crashing down. Why? The reason is because people became so distracted by what has been termed by Roman satirist and poet, Juvenal, as “Bread and Circus” (Martin, 2003).

To maintain their post in office, Roman politicians ensured their public popularity by guaranteeing citizens free grain and by personally funding the Roman Circus Maximus, which includes a multitude of spectator games and brutal gladiator sports. With the citizens engrossed in such trivial matters and fully satisfied by the meager free handouts of bread, politicians took full control of state affairs knowing they would gain sufficient approval from the masses, not by exemplary public service or policy, but by simply supplying bread and circus. And unbeknownst to the distracted Roman citizens, the civilization of Rome inevitably fell down (Moreell, 1956).

What does this have to do with America? Well, it appears the American people are up against a similar power-mongering force as were the latter-day Roman citizens: corporations. Yeah sure, politicians in America appear to have a lot of influence but I beg to challenge that independent, privatized corporations wield much more than any political talking head, and they sure out-do their roman emperor counter-parts in distracting the masses away from their own ultimate benefit for the sake of their own advancement.

"To maintain their post in office, Roman politicians ensured their public popularity by guaranteeing citizens free grain and by personally funding the Roman Circus Maximus, which includes a multitude of spectator games and brutal gladiator sports."

In fact, corporations essentially own and run the United States of America. In 1920 the Independent Treasury Act was established, which suspended the de jure (“by right of legal establishment”) or Treasury Department of the United States government (Hardison, 1996). Our congress handed the treasury over to the private corporation, the Federal Reserve. The Reserve is comprised of private banking interests such as: Rothschild Bank of London and Berlin, Warburg Bank of Hamburg and Amsterdam, Israel Moses Seif Banks of Italy, and Chase Manhattan Bank of New York to name a few. None of the Fed’s stock is owned by our own actual government as most Americans assume (Brown, 2008).

This enshrouded turnover of power occurred because the United States went bankrupt in 1933. Control of our national currency was taken away from the people themselves and put into the hands of private individual corporations. America must borrow money from these individuals and as a result the debt we all hear about on the news steadily increases, not to mention inflation, as money is created out of thin air.

If you ask people who is it that runs America, most would arguably answer the government, right? But the reality is our government is considerably indebted to the Federal Reserve. As a result you and I run around and provide labor to pay off this debt via taxes (implemented by the Federal Reserve); in other words “bankruptcy action disguised as a tax action” (Hardison, 1996).

"it appears the American people are up against a similar, power-mongering force as were the latter-day Roman citizens: corporations."

So, how did these international bankers become “creditors” (companies whom money is owed) to you and me? The answer lies in your very own birth certificate. The original birth record for every U.S. Citizen is on file in the official records in Washington, D.C. and the property and assets of every living U.S. Citizen is pledged as collateral for the National Debt. Our government has to pay up somehow and the only means they were able to think of was to utilize American citizens’ labor and potential to pay taxes as a form of credit to the private banking interests of the Federal Reserve (Traficant, 1993).

Now, if you pause and break out the copy of your birth certificate or your social security card you will notice your name in all caps. This does not represent your actual self, but is a legal fictitious name which represents yourself as a corporation that can generate wealth and subsequently pay taxes to repay the collateral that Uncle Sam borrowed from the Federal Reserve.

Secondly, you will notice on your birth certificate a series of red numbers, which is the tracking number for the commodity of your “corporate” self! In small print you will see “bank note company,” which is “an interest-bearing document giving evidence of a debt issued by a government body or corporation that is sometimes secured by a lien on property and is often designed to take care of a particular financial need” (Merriam-Webster Dictionary of Law (1996)). In other words we ourselves are debt security for repayment of the loan taken from the Federal Reserve by our government!

We have become indentured servants for the Federal Reserve and most do not even know it. We are taught in school to be good work force and citizens by paying our taxes. As a consolation we are given bread in the form of “jumbo deal” fast-food, social security, and medicade, and circus in the form of spectator sports and shows like American Idol and MTV. The international bankers secure their platform of power by distracting the American people by a false sense of happiness. It is no wonder that we are taught early on that making lots of cash is a sure means of happiness and a measuring stick of success with that awfully large debt that keeps on growing, along with the greed of the corporate banking enterprise itself. Just as in Rome, the potential of our country and civilization as we know it falling down due to the hubris of a small handful of individuals is indeed possible. So, is there a way we can transcend the current precarious situation we find ourselves seemingly shackled to?

The ancient Sanskrit teachings of the Bhagavad-gita, spoken five thousand years ago by Krishna in India, tell us there are two kinds of persons: suras (spiritualists) and asuras (materialists). Suras are described as interested in purification of one’s existence, cultivation of spiritual knowledge, self-control, simplicity, truthfulness, freedom from anger, non-violence, compassion for all living entities, forgiveness, and freedom from envy and from the passion for honor, to name a few (Bg 16.1-3).

Asuras, on the other hand, are solely interested in gratifying their senses and in fact are bound by the shackles of their own limitless desires! Always hankering for more, they become angry as there is no satiation for their incredulous lust. The Bhagavad-gita says such persons become “perplexed by various anxieties and bound by a network of illusions, they become too strongly attached to sense enjoyment and fall down” (Bg 16.13-16).

Each one of us can choose to go down the path of either sura or asura. From time immemorial we have seen many powerful leaders inevitably become corrupt from extravagant wealth and power. As such, they indulged in lavish affairs for their own enjoyment at the expense of those whom they had control over. Persons such as Hitler, Stalin, and Mussolini desired more and more dominion and out of their arrogance they ended up losing everything. On the other hand, we have seen many great leaders like Martin Luther King or Mahatma Gandhi who, out of their compassion and motivated by a quest for truth and justice, sacrificed their own personal enjoyment for the sake of the upliftment of others.

The main difference between such leaders is their basic misinterpretation of the world and themselves. If we believe ourselves to be mere material creations, spurred by our biological urges like animals, then the world is our arena for sense enjoyment. As apparent in the realm of animals, the smaller are always exploited by the larger and more powerful, isn’t it? In our current society, the big control the small by giving shallow, superficial engagements in sense gratification or through creating fear by threatening to take such menial sense gratification away. This is what happens when our socio-political system is divorced from a spiritual view.

When we lose our spiritual focus, how can we uphold higher principles of truth, compassion, and non-violence? We should be concerned, but we must know the solution begins with a change of consciousness. The solution is to remove this philosophy of the asura, this materialist philosophy of searching for temporary sense gratification, which enslaves us to our own petty desires. We must cultivate the qualities of the sura, the spiritualist, and utilize our senses for the benefit of others and for a higher purpose: Krishna (God), who is Truth personified. Let us not be distracted by these bread and circus games, which are designed to keep us unaware of the higher truth!