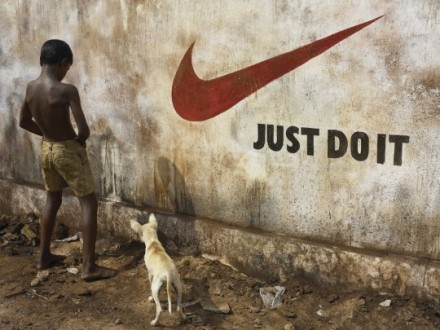 I came across a great video depicting the bleak reality of modern society’s current economic model. This short film depicts the model of a careless and grossly materialistic American corporate culture which is nurtured  by an ignorant, despondent, and highly-distracted-by-entertainment public.

The propensity to utilize nature’s own gifts is still there, even in the heart of modern civilized man. The leaders of modern civilization select their own residential quarters in a place where there are such naturally beautiful gardens and reservoirs of water, but they leave the common men to reside in congested areas without parks and gardens.

Advancement of civilization is estimated not on the growth of mills and factories to deteriorate the finer instincts of the human being, but on developing the potent spiritual instincts of human beings and giving them a chance to go back to Godhead. Development of factories and mills is called ugra-karma, or pungent activities, and such activities deteriorate the finer sentiments of the human being and thus turn society into a dungeon of demons.

“Human energy should be properly utilized in developing the finer senses for spiritual understanding, in which lies the solution of life. Fruits, flowers, beautiful gardens, parks and reservoirs of water with ducks and swans playing in the midst of lotus flowers, and cows giving sufficient milk and butter are essential for developing the finer tissues of the human body.

“As against this, the dungeons of mines, factories and workshops develop demoniac propensities in the working class. The vested interests flourish at the cost of the working class, and consequently there are severe clashes between them in so many ways.”