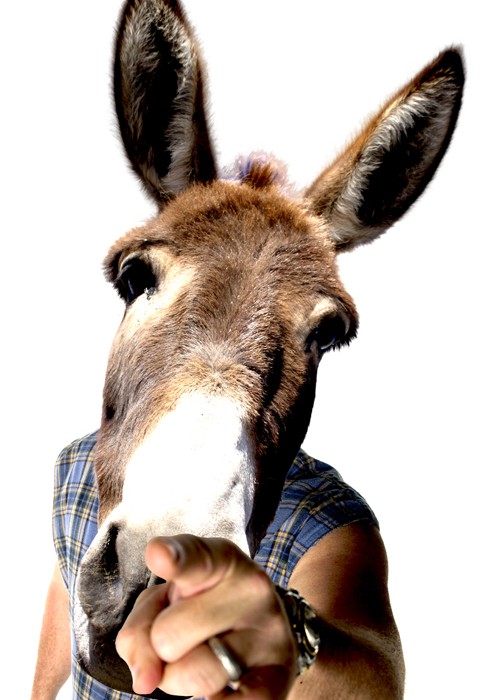 Mr. Donkey was extremely pleased with his three little donkettes. He loved nothing more than coming home after a hard day’s work to their soft little bodies and sweet voices. “Daddy, daddy,” they would cry gleefully and embrace him with their miniature hooves. He would instantly forgive his two eldest, boys, for sometimes getting a bit rough with ol’ dad in the course of their tomfoolery, and he would have done anything, just about anything in the world, to protect his youngest, his princess. The sound of her tiny ankle bells tinkling combined with silly giggles as she climbed all over him was like music of mystical sea sirens to his weary ears.

After a long day at Evilco, the chemical plant where Mr. Donkey was gainfully employed, these exchanges with his children made his job seem, with all its concomitant complications, worthwhile.

At Evilco, Mr. Donkey tried his best to please his manager, Mr. Rhinoceros. This was not at all an easy task. Popping out of his too-small shirts and always sporting a teeny dribble of saliva in the corners of his mouth, this corporeal gentleman was often in a bad mood. Mr. Rhinoceros would throw inexplicable tantrums, demanding from his employees things which seemed impossible or unnecessary, or both. If Mr. Donkey or any of the other donkeys would show the slightest signs of protest, the Evilco manager would charge at them with his massive body and hooked horn.

So the donkeys learned to be quiet, to not think or say too much. After all, there were many many donkettes waiting at home, their soft little bodies depending on the fact of the donkeys’ continued employment. The beasts of burden soothed themselves with the idea that Mr. Rhinoceros had been with Evilco for many years, and therefore this must somehow attest to his knowledge and authority.

To make the work situation even less enjoyable for Mr. Donkey, there was the matter of Mr. Fox. This hot shot was a recent graduate of Money U. and had initially come across as very helpful. He would offer to type Mr. Donkey’s reports, fix the formulas in his spreadsheets, have his shoes polished, fetch him hay sandwiches. Mr. Donkey, father-like and tickled pink, had as a result taken this fledgling under his wing, offering to teach him everything he knows about the chemical business.

Then one night, having forgotten something in his office, Mr. Donkey returned to find Mr. Fox in a hole which had been dug in the floor. In the hole were stacks and stacks of papers, which, upon closer examination, Mr. Donkey found to be his own reports – but which now bore Mr. Fox’s name! Threatening to report the incident, Mr. Donkey soon found himself with a fox attached to his feet, who was drenched in tears, repentant, citing a minor mental disorder which was easily curtailed with pills, pills which weren’t affordable right now because of his dying mother’s hospital expense, pills which were currently unobtainable you see, pills which he didn’t have! Since Mr. Donkey was the type to believe that the Brooklyn Bridge was indeed for sale, and because he was an ass, the incident was forgiven.

Six months later Mr. Donkey was asked to order new office furniture for the new vice president, Mr. Fox. Out of frustration and lustiness, Mr. Donkey liked to enjoy sex life with his wife on the weekends. Actually this statement is not entirely true. In reality Mr. Donkey “would have liked to have enjoyed sex life with his wife on the weekends,” but this endeavor was wholly dependent on the mood of the female ass. Using a mixture of emotional blackmail involving her loveless childhood, an appeal to Mr. Donkey’s duty to protect and care for her, and strategically worn black-lace nighties, this master politician kept him just where she liked him, under her hoof. It was most convenient for Mrs. Donkey to have the timings of sex with her husband be intimately linked with upcoming expeditions to the mall.

We need not mention the few times the neighbors discovered Mr. Donkey naked in the rain outside of his house. Braying incessantly for his female counterpart, trying, unsuccessfully, to shield his private parts from curious onlookers, this poor fellow was quite literally “left out in the rain.” It had been the spring season, you see, and there were forces in effect beyond Mr. Donkey’s comprehension, powerful forces, which made him behave in certain ways. Why does she have to do this, he would call out to the heavens, pounding on the front door with all his might, drenched, pathetic. He had been a most pitiable sight to the speechless neighbors, who were unsure whether to offer him warm tea and a towel or call animal control.

It hadn’t always been like that. Mr. Donkey recalled earlier days, when his better half was sweet, agreeable, when she liked to prepare his favorite meals and put little notes in his pockets. And she would wear such pretty clothes, lots of pinks and blues, accentuating her perky bosom and rotund behind. And heels, always heels for any special occasion. Her luscious donkey mane grazing his face, smelling of far away green meadows – into which she would sometimes stick exotic-looking flowers.

Mr. Donkey didn’t like the thought of it, but because sometimes he felt like he had no choice, (because he still had many spring seasons left inside him), and out of a mixture of uncontrollable impulse and also revenge, the idea of having an affair came to him at one point. To fan the flame of this idea and also of his loins, there was a cute new donkey-specimen at Evilco – Donatella. He could have sworn she looked at him “a certain way” on more than one occasion. Yes, he could understand her drift, and how she probably could not help but be overwhelmed by a slightly older donkey in charge of a whole department – who still had some spring seasons left inside him.

Donatella. His sin, his soul. 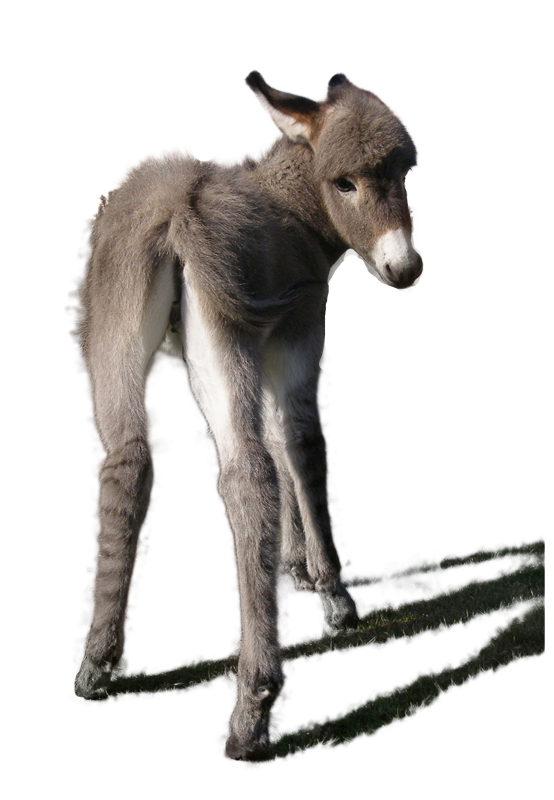 “Donatella. His sin, his soul.

Actually it hadn’t been that dramatic. This young equus asinus did in fact look at Mr. Donkey in a certain way on more than one occasion, but she was new, the poor thing, and one cannot even be sure that she did not have some kind of retinal disorder or that she did not look at all the other donkeys in a certain way. Encouraged by her titillating glances, Mr. Donkey immediately set out to buy four new suits and a 12-pack of Manuré cologne.

Trying his best to appear dapper and “down with things,” this ass made the brave decision of striking up conversations with the young secretary. Leaning his elbow on her desk, invading her space entirely, grinning ineffectually, he heard himself say things like “chill,” “word,” and “dope,” words which he had obtained from his teenage nephew upon massive amounts of bribery. Because Mr. Donkey was not very expert in the art of taking hints, or dappery, and because he was delusional, this poor fellow thought he was actually making headway with Donatella.

Providence allowed Mr. Donkey to belabor within his delusion for a couple months. Then, ominously, the moment of truth arrived – at the company Christmas party. It was delicious irony, to some at least, that the very night and the very spot where Mr. Donkey planned to make his intentions clear to Donatella, (in a certain darkened corner of the office floor, and under a mistletoe), he would come upon his beloved in a lusty embrace with another, and to add insult to injury – a horse. This scene was like a very bad dream to Mr. Donkey, as he watched, in what seemed like slow-motion, the apple of his eye stroking the superior species’ sinewy muscles and laughing idiotically at whatever this beast was whispering in her dainty donkey ear.

Mr. Donkey could not take it; he ran to the toilet, knocked over the perplexed hedgehog sitting on it, pulled back his ears, and vomited. Then he galloped to his office, on all fours now, seething with a mixture of rage and purpose, wildly unearthed his stash of the cologne (which was almost out), and with all his might, through hot tears, hurled it out the window.

So Mr. Donkey was back to his donkettes. These three little creatures, with their soft little bodies, were the only things which gave his life any meaning, Mr. Donkey penned mythically in his journal later that evening.

But then the donkettes became teenagers. The oldest turned into the school bully, terrorizing all the female chickens in particular, and the other boy was odd and unpopular, obsessing over his leaf collection and spouting crypto-Marxist ideas. The girl, although she was bright as a child, unfortunately grew very large breasts, and because of this quickly took an honorary title as one of the high school hussies.

Years later, at Evilco, Mr. Fox successfully absconded with the company’s 401-k plan to South America, leaving the donkeys without retirement funds for their old age. Fortunately Mr. Donkey, copying his neighbor Mr. Squirrel, managed to maintain a secret IRA savings account throughout his long and thankless years at Evilco.

A year after retirement, however, Mr. Donkey came down with cancer. On his deathbed his lovely wife and children began to quarrel over the money, and Mr. Donkey then cursed it. This picture of his family arguing, which unfolded to his weakening eyes like a cheaply made film noir, was Mr. Donkey’s last glorious vision of this world, as he checked out of it.

Floating higher and higher above the scene, feeling a great sense of relief at last, Mr. Donkey looked down at his family, who were pecking at his corpse just like turkey vultures, and vowed, with strength of conviction he had never experienced before, to do it differently next time around.