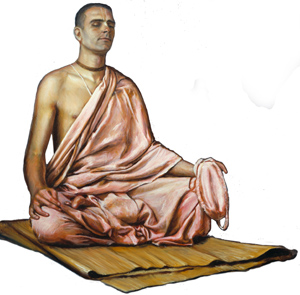 The transcendental vibration established by the chanting of Hare Krishna, Hare Krishna, Krishna Krishna, Hare Hare, Hare Rama, Hare Rama, Rama Rama, Hare Hare is the sublime method for reviving our transcendental consciousness. As living spiritual souls, we are all originally Krishna conscious entities, but due to our association with matter from time immemorial, our consciousness is now adulterated by the material atmosphere.

The material atmosphere, in which we are now living, is called maya, or illusion. Maya means “that which is not.” And what is this illusion? The illusion is that we are all trying to be lords of material nature, while actually we are under the grip of her stringent laws. When a servant artificially tries to imitate the all-powerful master, he is said to be in illusion. We are trying to exploit the resources of material nature, but actually we are becoming more and more entangled in her complexities. Therefore, although we are engaged in a hard struggle to conquer nature, we are ever more dependent on her. This illusory struggle against material nature can be stopped at once by revival of our eternal Krishna consciousness.

Krishna consciousness is not an artificial imposition on the mind. This consciousness is the original, natural energy of the living entity. When we hear this transcendental vibration, this consciousness is revived. This simplest method of meditation is recommended for this age. By practical experience also, one can perceive that by chanting this maha-mantra, or the Great Chanting for Deliverance, one can at once feel a transcendental ecstasy coming through from the spiritual stratum. In the material concept of life we are busy in the matter of sense gratification, as if we were in the lower, animal stage. When a little elevated from this status of sense gratification, one is engaged in mental speculation for the purpose of getting out of the material clutches. More elevated is one who tries to find out the supreme cause of all causes—within and without. And when one is factually on the plane of spiritual understanding, surpassing the stages of sense, mind, and intelligence, he is then on the transcendental plane. This chanting of the Hare Krishna mantra is enacted from the spiritual platform, and thus this sound vibration surpasses all lower strata of consciousness—namely sensual, mental, and intellectual. There is no need, therefore, to understand the language of the mantra, nor is there any need for mental speculation, nor any intellectual adjustment for chanting this maha-mantra. It is automatic, from the spiritual platform, and as such, anyone can take part in the chanting without any previous qualification.

THE ECSTACY OF MANTRA MEDITATION

In the beginning, there may not be the presence of all transcendental ecstasies, which are eight in number. These are: (1) being stopped as though dumb, (2) perspiration, (3) standing up of hairs on the body, (4) dislocation of voice, (5) trembling, (6) fading of the body, (7) crying in ecstasy, and (8) trance. But there is no doubt that chanting for a while takes one immediately to the spiritual platform, and one shows the first symptom of this in the urge to dance along with the chanting of the mantra. We have seen this practically. Even a child can take part in the chanting and dancing. Of course, for one who is too entangled in material life, it takes a little more time to come to the standard point, but even such a materially engrossed person is raised to the spiritual platform very quickly. When the mantra is chanted by a pure devotee in love, it has the greatest efficacy on hearers, and as such this chanting should be heard from the lips of a pure devotee, so that immediate effects can be achieved. As far as possible, chanting from the lips of non-devotees should be avoided. Milk touched by the lips of a serpent has poisonous effects.

These three words, namely Hare, Krishna, and Rama, are the transcendental seeds of the maha-mantra. The chanting is a spiritual call for God and His energy to give protection to the conditioned soul. This chanting is exactly like the genuine cry of a child for its mother’s presence. Mother Hara helps the devotee achieve the grace of the Father, who reveals Himself to the devotee who chants this mantra sincerely.

“Mantra” means “sound that frees the mind from ignorance”

You can chant the mantra anywhere and at any time, but it is best to set a specific time of the day to regularly chant. Early morning hours are ideal.

The chanting can be done in two ways: singing the mantra, called kirtana (usually done in a group), and saying or reciting the mantra to oneself, called japa (which literally means “to speak softly”). Concentrate on hearing the sound of the mantra. As you chant, pronounce the mantra clearly and distinctly, in a prayerful mood. When your mind wanders, bring it back to the transcendental sound.

It is good to chant on japa beads. This not only helps you fix your attention on the mantra, but it also helps you count the number of times you chant the mantra daily. Each strand of japa beads contains 108 small beads and one large bead, the head bead. Begin on a bead next to the head bead and gently roll it between the thumb and middle finger of your right hand as you chant the full Hare Krishna mantra. Then move to the next bead and repeat the process. In this way, chant on each of the 108 beads until you reach the head bead again. This is one round of japa. Then, without chanting on the head bead, reverse the beads and start your second round on the last bead you chanted on.

Initiated practitioners chant at least sixteen rounds of the Hare Krishna mantra daily. But even if you can chant only one round a day, a good principle is that once you commit yourself to chanting that round, try to complete it every day. When you feel you can chant more, then increase the minimum number of rounds you chant each day-but try not to fall below that number. You can chant more than your fixed number, but do your best to maintain a set minimum each day.

The japa beads are considered sacred and it is therefore recommended to keep them in a clean place. To keep your beads clean, it’s best to carry them in a special bead bag. (available from the temple store)

GIVE HIM ENOUGH ROPE TO HANG HIMSELF WITH