Speaking in Boston before the International Student Societ, His Divine Grace A.C. Bhaktivedanta Swami Prabhupada provides a practical, simple, and profound solution for world peace and harmony.  Noting the increasing number of flags at the United Nations building in New York, he states that inter-nationalism is failing because “your international feeling and my international feeling are overlapping and conflicting.  We have to find the proper center for our loving feelings.”

Your society is known as the Inter­national Student Society. There are many other international societies, such as the United Nations. The idea of an international society is very nice, but we must try to understand what should be the central idea of an international society. If you throw a stone into the middle of a pool of water, a circle will expand to the limit of the bank. Similarly, radio waves expand in a circle, and when you capture the waves with your radio you can hear the message. In the same way, our loving feeling can also expand. At the beginning of our life, we simply want to eat. Whatever a small child grabs, he wants to eat. Then, as he grows a little, he tries to participate with his brothers and sisters. This is an increase in the feeling of fellowship. Then, as he grows up, he begins to feel love for his parents, then for his community, for his country, and at last for all nations. But unless the center is right, that expansion of feeling—even if it is national or international—is not perfect.

You feel for other Americans because they are born in this country. You may even sacrifice your life for your countrymen. But there is a defect. If the definition of national is “one who is born in a particular country,” then why are the animals born in America not considered Americans? We are not expanding our feelings beyond the human society because we don’t think animals are our countrymen; we send them to the slaughterhouse.

Our society, the International Society for Krishna Consciousness, is teaching the people of all countries that the center of their affection should be Krishna. In other words, we are teaching people to be mahatmas. You may have heard this word mahatma before. It is a Sanskrit word that is applied to a person whose mind is expanded, whose circle of feelings is very much expanded. He is a mahatma. Maha means big or great, and atma means soul. He who has expanded his soul is called a mahatma. 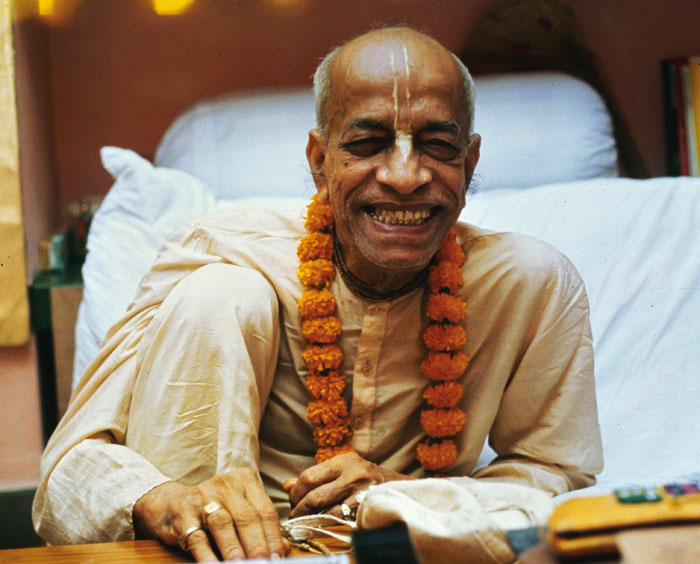 The Bhagavad-gita, an ancient Indian spiritual text, gives a description of the person who has widely expanded his feelings:

The first idea in this mantra is that one can become a mahatma only after many births. The soul is transmigrating through many bodies, one after another. There are 8,400,000 different species of life, and we evolve through them until at last we come to the human form. Only then can we become a mahatma. This is why Krishna says “After many, many births one may become a mahatma.”

A similar mantra is labdhva su-durlabham idam bahu-sambhavante: “After many births you have achieved a human body, which is difficult to get.” This human form of life is not cheap. After being born in at least 8,000,000 different species, we get this human form.

If one is actually cultivating spiritual knowledge—not in one, but in many lives—one eventually comes to the highest platform of knowledge and is called jnanavan, or the possessor of true knowledge. Then, Krishna says, “He turns toward Me, Krishna, the all-attractive Supreme Personality.”

Now, why does a man in knowledge turn toward Krishna? Because he knows that Krishna is the central point of all loving feelings. After cultivating knowledge for many births, a person who expands his consciousness up to the point of loving God—he is a mahatma, a great soul. God is great, and His devotee is also great. But, Krishna says, sa mahatma su-durlabhah: “That great soul is rarely to be seen.”

Now, we have expanded our feelings of love to various objects. We may love our country, our community, our family, our cats and dogs. In any case, we expand our love according to our knowledge. And when our knowledge is perfect, we come to the point of loving Krishna. That is the perfection. Love of Krishna is the aim of all activities, the aim of life.

Symptoms of a Great Soul

Whatever we see is made up of various energies of God. It is said, “The Supreme Absolute Truth has many varieties of energies.” And these energies are acting so nicely that it appears they are working automatically. For example, we have all seen a blooming flower. We may think that it has automatically blossomed and become so beautiful. But no, the material energy of God is acting. Similarly, Krishna has a spiritual energy, and a mahatma, one who is broad-minded, is under the protection of that spiritual energy; he is not under the spell of the material energy. What is the symptom of that protection? “A mahatma is always engaged in devotional service to Me.” That is the main symptom of a mahatma. Does he engage in this devotional service blindly? No. Krishna says “He knows perfectly that I am the source of everything.” 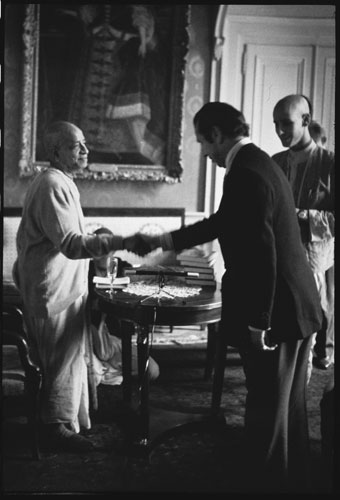 The nations are trying to be united. In your country there is the United Nations. Unfortunately, instead of the nations becoming united, the flags are increasing. Similarly, India was once one country, Hindustan. Now there is also Pakistan. And some time in the future there will be Sikhistan and then some other “stan.” Instead of becoming united we are becoming disunited, because we are missing the center. Therefore, my request is that you please try to find out the real center of your international movement. Then your international movement will be perfect.

In the Fourteenth Chapter of the Bhagavad-gita it is said,

Here Krishna says, “I am the father of all forms of life. The material nature is the mother, and I am the seed-giving father.” Without a father and mother, no one can be born. The father gives the seed, and the mother supplies the body. In this material world the mother of every one of us—from the highest being down to the ant—is the material nature. Our body is matter; therefore it is a gift of the material nature, our mother. But I, the spirit soul, am part and parcel of the supreme father, Krishna. 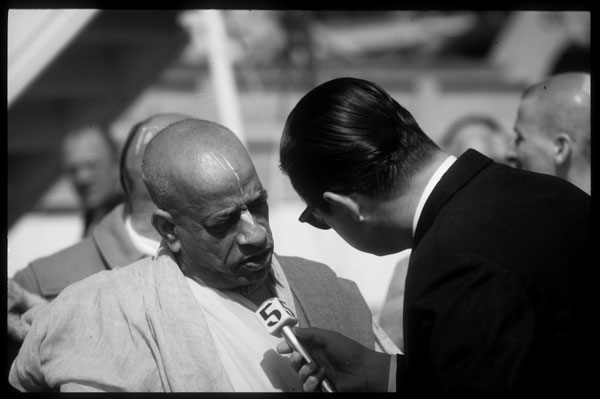 Srila Prabhupada is interviewed by a news reporter.

This Too Is Life