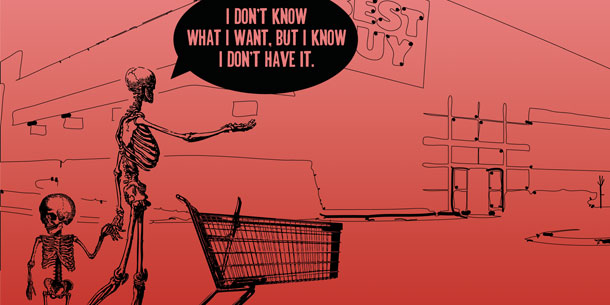 After a truly awesome Thanksgiving lunch, all vegetarian, I should mention, I hung out at the Krishna Lounge for dinner-socializing with a few lounge buddies. At about 10pm I decided to write this article so I, accompanied by two friends, headed out to a nearby Best Buy store to interview Black Friday shoppers.

At about 10:30pm we pulled into the parking lot of the Best Buy in La Jolla. The line of bargain hunters was stretching all around the parking lot. We started to interview people at the back of the line. A guy and a girl in their mid 20s were friendly enough to talk with us. They had just barely gotten into the line. Unlike some, these two prefer to take it easy, not stress too much about the hunt for the best discounts. Their waiting time in line will be up to two hours before they reach the Best Buy shelves. DVDs, BlueRays, and video games are what this couple set their minds on. Most shoppers, like this couple, look up deals online and then decide what stores to shop at. Thus the shopping frenzy begins days before Black Friday.

At about 10:30pm we pulled into the parking lot of the Best Buy in La Jolla.

“What’s it like when the store’s door opens?” I asked.

“It is crowded and hectic. Things are scattered all over the floor,” they answered.

Next we talked to the people at the front of the line. We were surprised to find a whole family there. Father, mother, children, and a few of their neighbor’s kids were the group who led the line. In order to be the first in the line, they had to get there on Monday morning. Yeap, that’s right – they had been waiting in the line since Monday morning, the whole family. Their son, who was probably about ten years old, wanted to get there on Saturday, but the mom thought it was too extreme, so they settled for Monday. They had set up a camp there. Tents, seats, blankets, beds, food, books, electronics – what seemed to be half of their house was relocated onto the sidewalk, just in front of Best Buy. They were all very jolly. The mom was happy to talk to us, while the kids were bouncing all over the place. The father, however, felt somewhat ashamed to be there. He kept commenting about their expedition: “Materialism at its best!” “Consumerism!” Perhaps it had something to do with us monks being present there. I guess the contrast was obvious.

Long line of shoppers, waiting for the Best Buy store to open at midnight.

I asked them whether they had done anything like that before. Mom said it was her first time to camp out. Her children had done it before.

“What made you do it?” I asked the mother.

“TV!” was her short answer, followed by loud laughter.

Last year her family missed getting one so this year she joined the troops, giving a helping hand with something that mattered a lot to them – a TV.

Shoppers are living in tents days before Black Friday

These guys were not the only ones who had set up a camp on the sidewalk. There were quite a few such camps. Tents, beds, and chairs stretched all over the sidewalk, several hundred yards in length. I couldn’t help but think what it would be like if homeless people set up a camp there. They would have probably been harshly treated and forced to move. What would have happened if the Occupy Wall Street movement set up a camp there? The police would have probably beaten them up, put them behind bars, and confiscated their property. Charges would have been raised against them. But wait! What is the difference between both groups of Americans? Let me think. Thinking, thinking, thinking. I got it! The first group, the shoppers, are good Americans! They are so good that they are allowed to camp on the sidewalk while the other guys are bad and so they are not allowed camping.

She is in a sleeping bag, laying on the sidewalk with her shoes and fastfood left-overs next to her

In 1999, when I first came to the States, I was told that a good American is one who does not fix broken things, but rather buys new ones. Such a person, God bless his soul, is the building block of the American economy. When I spoke against this philosophy, thinking it to be insanity, I was considered anti-American. Now, thirteen years later, I think a few more Americans share my opinion that an economy based on ever-increasing consumption of unnecessary products is unsustainable and inhuman. I think anyone who has not had their heads stuck up their asses (Ooops! Did I just say that? It won’t happen again. I promise.) for the past decade or so, should know the dangers of the modern, unsustainable economic system which is bumping against finite natural resources.

Checking out coupons while waiting in line

The current materialistic system is inhuman because it erodes human qualities. On the Thanksgiving night, I visited three different shopping malls and I found it peculiar that nearly everyone I met felt somewhat embarrassed. People were looking away, almost like wanting to hide themselves. The father, whose wife we interviewed, kept making comments, disapproving of them being out there. And certainly there is lots to be embarrassed about. Blinded by the love of matter, people are swallowing their pride and dignity, some basic human qualities, for the sake of possessing a few new items, things which are not going to make any one of them a better person. It is a form of prostitution.

The police officer interviewed is in the car

I have to say that the people I met that night were all warm, friendly, and very human. I don’t intend to offend them; but, I do think they have been victimized by the corporate, materialistic America. Every system of education is based on the reward and punishment mechanism. If you want to promote a behavior, you need to reward it. If you want to curb a behavior, you need to punish it. Even dogs are taught by this system. When groups like Occupy Wall Street camp out in urban settings, they get punished while their shopper friends’ culture is encouraged and allowed.

Usually people don’t sell their soul at once. It tends to be a gradual process. One is first enticed to make one step into the bizarre and when one gets acclimatized to the weirdness, one is enticed to make another step in the same direction. Thus, after a while, even the most odd can become a norm. Think of the mom who was enticed by a TV. When I told a friend of mine about a family camping out four full days just to lay their hands on a few physical products, she commented, “Maybe that was their quality family-bonding time.”

A Best Buy employ makes sure the door is securely locked

My spiritual teacher told us that illusion has two potencies by which it operates: covering and throwing down. The covering aspect makes one come up with a variety of excuses to justify incongruous acts. Once one engages in such acts, one continues to fall down – throwing down potency in action. Think of a thief who knows that stealing is immoral, but to get himself over the guilt trip he first rationalizes the immorality, coming up with a list of explanations why he needs to steal. Once he gets himself into the stealing business, he is likely not going to be able to stop and will continue to degrade himself.

As the shoppers wait in line, this pile of garbage shows the future of all things

That night, at the Best Buy store in Mira Mesa, I had a chat with a cop who was there on duty. He told me there is plenty of subhuman behavior, Black Friday shopping related, which was the reason he was deployed there. He was deployed not by Best Buy but by the city of San Diego. Otherwise warm and friendly human beings, enticed by physical products, tend to lose their humanity and thus behave like beasts who pose a threat to each other. The cops have to be there, to prevent them from hurting each other. According to this police officer, while people commonly fight over items in the store, what concerns him is when fights brake out in the line, outside of the store. As midnight approaches, the time when stores open, the shoppers’ meditation on things thickens and they start to lose patience. Some of the shoppers, fixed on their goal, become unconscious and inconsiderate of other people’s needs and concerns. Offending others, cutting the line, etc. starts to take place. Shouting, retaliation, and fights ensue – behavior not befitting civilized human beings.

And how did the degradation begin? With a simple contemplation of things. First, when he saw the ad, our American citizen did not think he was going to behave like a beast. But gradually, a step at a time, he eventually found himself shouting and yelling, fist-fighting in the line, crawling all over the store’s floor, slapping other hands, pulling, pushing, crying, growling, etc., whatever it took to lay his hands on a discounted item. Like it says in the Bhagavad-gita, the process goes from contemplation to attachment, to desire, to anger, bewilderment, and loss of intelligence.

Blessed are those who are self-satisfied, who store their riches internally. A friend of mine, one of the first friends I made in the States, Anastasia, said, “Yesterday I realized how much I am thankful for what I actually don’t have.” A saying states that happiness is not in getting what you want, but in wanting what you have.

Krishna taught: “One should be satisfied with whatever he achieves by his previous destiny, for discontent can never bring happiness. A person who is not self-controlled will not be happy even with possessing the whole world.”