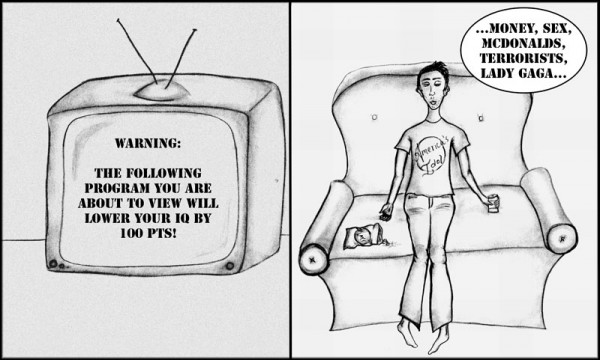 One needs only to watch television for but a few minutes to get an idea of the modern culture’s mentality. From lusty sitcoms and rampant commercials with close-ups of perspiring fountain drinks along-side mile-high hamburgers, to images of war and death occurring on the other side of the globe with side bars depicting rising gas prices- modern day television in essence promotes a consciousness largely based on eating, mating, and fearing.

Yet, where’s the novelty in such activities? Modern television makes us out to be merely “polished” animals- acting from lower urges in order to satisfy our desire to gratify our senses, so much so that we will even defend and fight to the death to protect this desire. But is this where true happiness lies? It is clear that more material pleasure, and the quest therein, only begets more anxiety. For if one desires to enjoy the objects of the senses they must work even harder in order to obtain such a transitory level of happiness gained through external means. This is quite the opposite from an intelligent plan.

Real intelligence lies in finding out how to transcend the anxieties of modern life, which are all too apparent and are epitomized on modern television. We must inquire into the nature of the self because what and with whom we identify governs our actions and subsequently our happiness in life. We must be careful not to confuse our identity with that which is observed- namely the body and all of the activities it takes part in- with the observer; the individual spirit soul, which is eternal.

Identification with matter, as has been pointed out can only lead to increasing dissatisfaction due to its ephemeral nature, whereas, knowing oneself to be a spirit soul- an eternal part and parcels of the Supreme Source gives one the proper basis upon which to act and relate to others in the world in an intelligent, selfless way.

Your Life After Trayvon’s Death