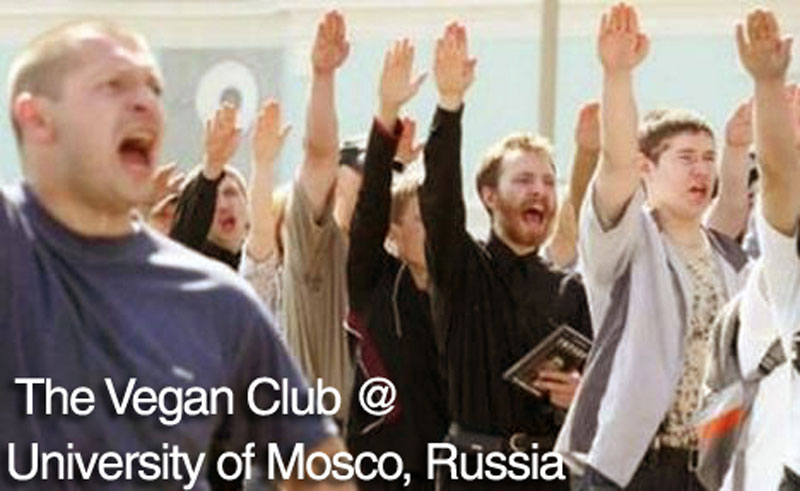 “For every questionable esoteric study vegans use to attract new converts, there is a mountain of research that confirms the nutritional values of natural whole milk. Yet vegans are reticent about these medical reports and that’s both embarrassing and bad publicity.”

As director of the American Vedic Association and a practicing Vegetarian I have embraced the tradition of honoring and protecting the cow as one’s own mother for nearly 40 years. I therefore share with the Vegan community their outrage at the cruelty inflicted on commercial dairy cows. I don’t however agree that the Vegan gospel “Thou Shall NOT drink Milk” is the most effective strategy for putting an end to the barbaric way the dairy industry exploits and abuses cows. In fact there is good reason to believe that Vegan Fundamentalists will be the ones responsible for perpetuating the suffering of cows well into the future for endless generations.

Vegans are well known for generating a lot of propaganda about the sins related to drinking milk. One of the more aggressive themes they are fond of promoting is the declarative “Milk is Poison” [1] campaign. To defend their agenda for abolishing the consumption of milk, vegans start by demolishing the reliability of USDA recommendations. They then make long lists of all the various hormones, vaccines, and wonder drugs that have become a standard part of what the large corporate dairy farms must do to stay in business because of the unnatural, confined, factory like environments they subject cows to use in order to stay competitive.

This makes some dramatic headlines, but informed people already know how various food industries, such as the cattle ranchers and mega dairies, have historically influenced the daily nutritional requirements recommended by the government. Attentive consumers also know that itemizing all the extra controversial ingredients that find their way into the milk supply is irrelevant to any serious discussion related to evaluating the relevance of what whole, unadulterated fresh milk has on our diet.

Vegans also generate a lot of hysteria about the fat content in milk and the lactose intolerant population. They consider these things as further “Proof” why humans should not consume milk products. However if we accept these claims as legitimate reasons to avoid all forms of milk, then we should also abandon the consumption of peanuts, wheat and hundreds of other types of foods that are fattening or may sometimes cause allergic reactions.

Most people agree that the excessive consumption of any single food has a negative health impact and this is also true for milk. However, when backing claims of the negative health effects of milk, vegans often cite studies of people examined immediately after consuming a frothy milk shake or who are in the habit of eating way too many milk products. Studies also show that the body has a severe reaction to the consumption of hot chilies, but nobody gets alarmed about the capsaicin which causes those biological symptoms. Yet vegans act like they attained “culinary nirvana” and have been anointed with the great commission to save the world from the evils of milk. Just how prudent is it to promote controversial, fear based, skewed propaganda if we really wish to put an end to the abuse of dairy cows?

Independent neurologists have confirmed the importance of vitamin B12 in our diet. This nutrient is available predominantly in dairy, fish, meat, poultry, eggs and shellfish. A deficiency in B12 leads to anemia, irritability, anorexia, regression, poor brain growth and cognitive problems, particularly in young developing children! [2] However, vegans tend to ignore these important facts. They never mention the studies that conclude with the warning: “In order to reach favorable vitamin and mineral intakes, vegans should consider taking supplements…” [3]

It is therefore disingenuous for vegans to prance around giving people the impression that it’s easy for the average carnivore to just immediately cut all meat, fish, eggs, poultry, honey, and dairy out of their diet. The truth is that only a very small percent of the population has the fortitude to start the vegan diet and even a smaller percent can stick to it. At least part of the reason why some drop out is because vegans must plan their meals very carefully if they want to stay healthy, and who has the time for that in a culture addicted to fast food and frozen dinner convenience?

When all the “studies” are objectively considered, the so called research used to buttress up the vegan agenda is very limited, controversial, inconclusive, speculative and zealously misleading. For every questionable esoteric study vegans use to attract new converts, there is a mountain of research that confirms the nutritional values of natural whole milk. Yet vegans are reticent about these medical reports and that’s both embarrassing and bad publicity. By failing to acknowledge the gaping flaws in the vegan doctrine the whole vegetarian movement becomes stigmatized as unreasonable and radically out of touch.

What’s particularly disturbing about the vegan dogma is the potential for irreversible damage in the development of innocent babies born to naive vegan parents. When the evening news starts interviewing pediatricians for children that were never allowed to drink cow milk and now suffer with underdeveloped brain tissue [5], the whole vegetarian movement will suffer a huge public relations catastrophe! Then the dairy industry will not only go unchecked, but we can expect that even more slaughterhouses will get built.

If we listen closely to moderate vegans, they sometime reluctantly acknowledge under their breath that there is a lot of hyperbole being spewed to leverage the public into denouncing milk. When confronted with long-standing facts, some vegans quietly acquiesce that there really isn’t anything wrong with a diet that includes a moderate amount of milk products.[6] The Vedic rule of thumb is that one can safely enjoy the equivalent of one cup of milk a day, be it in the form of butter, gee, farmer’s cheese or home-made cultured yogurt, etc. Objective experts confirm this ancient wisdom: “Our study does seem to show that a bit of what you like [milk] does seem to do you good.” – Dr Andy Ness, Bristol University [7]

When the issues related to health are debunked and exposed, vegans take up an ethical assault against those who dare to patronize the dairy industry. One popular guilt-generating tactic is to dramatize the plight of a thirsty calf getting dragged away from its mother’s udder. Large commercial dairies no doubt do that at some point to maximize their harvest, but this overly dramatized event, and is not an honest reason to indict the consumption of milk for the rest of eternity. Such emotionally charged arguments may temporarily convince uninformed people to stop purchasing milk for a little while, but once the public realizes how their sentiments have been maneuvered they will resent giving up the occasional pleasure of cottage cheese and pineapple for absolutely no reason.

After giving birth a cow will offer approximately 50 lbs of milk a day. It is ridiculous for anyone to assert that a baby calf weighing somewhere between 40-100 lbs. could possibly drink that much milk! Furthermore dairy people know that if that excess milk isn’t removed from the udder of that cow in a timely fashion, it will be painful to the cow. When that happens a biological message is sent to the cow’s milk producing organs to start shutting down. By regularly milking the cow, both the calf and the person tending to the health and safety of the cow are provided with an abundant supply of fresh wholesome milk. This is actually the reason why the cow is so highly respected in agrarian societies, most particularly in India. The cow has the miraculous ability to eat dry straw, grass, and kitchen scraps and convert these uneatable things into one of the most nutritious, versatile and good tasting foods, long after humans are weaned from their birth mother.

“One popular guilt-generating tactic is to dramatize the plight of a thirsty calf getting dragged away from its mothers udder. After giving birth a cow will offer approximately 50 lbs of milk a day. It is ridiculous for anyone to assert that a baby calf weighing somewhere between 40-100 lbs. could possibly drink that much milk!”

Pushing someone into the deep end of the pool when they don’t even know how to swim is the best way to traumatize someone so they never want to be around a pool again. Our first task should be to educate the general public about the benefits of a vegetarian diet, not terrorize them into following fanatically austere eating habits they are completely unprepared for and will probably abandon. The purpose of this article is to show how this aggressive strategy is counter-productive.

The one ethical argument that is legitimate is in relation to all the business driven cruelty corporate dairies inflict on cows during their short lives. When the white-gold milk-wells run dry, these innocent animals are sent off to the slaughterhouse to be processed into USDA approved 50lb boxes of frozen fast-food burger patties. This is the epitome of ungratefulness and an atrocity no sensitive individual would ever condone. Determining how to effectively put an end to this barbaric arrangement brings us full circle back to the opening question. “What is the best way to alleviate the suffering of cows abused by commercial dairies?”

Mayesvara Dasa is the director of the American Vedic Association (AVA) located in Ojai California and has been a Lacto-Vegetarian since 1973. On the first and third Tuesday of every month he sponsors a discussion group to help educate the public about the great Vedic culture of ancient India and serves a Free Vegetarian dinner to all who attend.

Vegan Nazi:
(vee-guhn naht-see) Someone who is a vegan and goes beyond the acceptable ways of professing this fact (wearing t-shirts and patches, handing out leaflets, writing 10-page facebook comments, chasing you down the street, and so on) and harasses people about their meat/dairy eating ways in a non-joking manner. (not to be confused with your garden variety vegan.)
E.G. – “dude, that kid started screaming at me for eating a cookie with milk in it… what a vegan nazi!”
– From urbandictionary.com

Alternative to the Morifying Routine