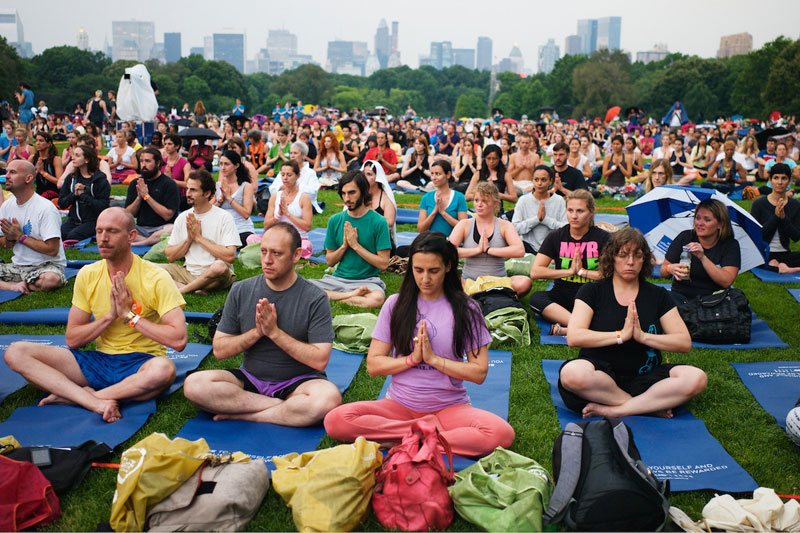 A lot of people in modern America perform spiritual activities. Some go to churches, some go to mosques, and some, being more freelance spiritual types, prefer reading many different spiritual books, going to yoga studios and perhaps drum circles. It’s common for people to add spiritual activities to the routine lifestyle they are already comfortable with.

However, a critical component to spiritual advancement is refraining from certain activities. Often this means not doing things we otherwise might want to do. Spirituality is not a hobby to do in one’s spare time while not bothering to change some of our old habits. Rather, it is the reason we exist.

” In order to change our consciousness for the better, we should resist dong things that are spiritually counterproductive, and sometimes force ourselves to do things we might not want to do, but are essential for spiritual advancement.”

It is not that one goes to church on Sunday, then the rest of the week drinks, smokes, cusses, and generally behaves like a Neanderthal. One is not advised to go to the yoga studio a few times a week, while the rest of the week compulsively giving in to the demands of the tongue and genitals. To make real advancement we have to overhaul our whole life, habits, and habitual ways of thinking.

In order to change our consciousness for the better, we should resist dong things that are spiritually counterproductive, and sometimes force ourselves to do things we might not want to do, but are essential for spiritual advancement. When we practice the do’s and don’ts of our spiritual discipline, our consciousness gets purified. If we do this for long enough, we become habituated to living a purer, more spiritually elevated lifestyle. This is how one makes spiritual advancement.

In the Sanskrit language the word to describe this concept is tapasya, which can be translated as austerity or voluntarily accepting discomfort in order to make spiritual progress. To give you some example of tapasya, the monks at our temple wake up between 3 and 4 in the morning, take a cold shower to purify the mind, and perform 4 hours of meditation and study. We constantly strive to control our thoughts and actions, and have as few possessions as possible. We follow four principles which are no intoxication, no meat eating, celibacy, and no gambling.

Certainly, though, celibacy is not for everyone. For one, there wouldn’t be any people left on the Earth in about 100 years if everyone were celibate monks. But the idea is the more we voluntarily sacrifice for spiritual advancement, the more advancement we make.

In the ancient Vedic culture of India, a person is not considered to be quite on the human platform unless he or she is able to forgo urges for immediate satisfaction in favor of noble, pure, and longer term achievements. Animals don’t think about the consequences of their actions, they just do what feels good in the moment. If a lot of food is put in front of an animal it will gorge itself. If an attractive member of the opposite sex walks by, it will have sex and then leave without considering the welfare of its offspring or the mother. However human beings have certain social responsibilities and if everyone just did whatever feels good in the moment, then society would collapse.

The human body that we as eternal spirit souls currently possess, is meant for self-realization. It is not meant for just eating, sleeping, mating, and defending our territory and mating rights. If we choose to reduce our existence to the bestial platform, then we should not be surprised if in our next life we get an animal body. But if we choose to consider our actions carefully and practice self-control, we can be elevated to higher planes of consciousness.

Excerpt from the Bhagavad-gita

Arjuna said: O Krishna, what are the symptoms of one whose consciousness is merged in transcendence? How does he speak, and what is his language? How does he sit, and how does he walk?

Krishna said: O Arjuna, when one gives up all varieties of desire for sense gratification, which arise from mental concoction, and when his mind, thus purified, finds satisfaction in the self alone, then he is said to be in pure transcendental consciousness.

One who is not disturbed in mind even amidst the threefold miseries or elated when there is happiness, and who is free from attachment, fear and anger, is called a sage of steady mind.

In the material world, one who is unaffected by whatever good or evil he may obtain, neither praising it nor despising it, is firmly fixed in perfect knowledge.

One who is able to withdraw his senses from sense objects, as the tortoise draws its limbs within the shell, is firmly fixed in perfect consciousness.

The embodied soul may be restricted from sense enjoyment, though the taste for sense objects remains. But, ceasing such engagements by experiencing a higher taste, he is fixed in consciousness.

The senses are so strong and impetuous that they forcibly carry away the mind even of a person of discrimination who is endeavoring to control them.

One who restrains his senses, keeping them under full control, and fixes his consciousness upon Me, is known as a person of steady intelligence.

While contemplating the objects of the senses, a person develops attachment for them, and from such attachment lust develops, and from lust anger arises.

From anger, complete delusion arises, and from delusion bewilderment of memory. When memory is bewildered, intelligence is lost, and when intelligence is lost one falls down again into the material pool.
But a person free from all attachment and aversion and able to control his senses through regulative principles of freedom can obtain My mercy completely.

One who is not connected with the Supreme can have neither transcendental intelligence nor a steady mind, without which there is no possibility of peace. And how can there be any happiness without peace?

As a strong wind sweeps away a boat on the water, even one of the roaming senses on which the mind focuses can carry away one’s intelligence.

Therefore, one whose senses are restrained from their objects is certainly of steady intelligence.

A person who is not disturbed by the incessant flow of desires—that enter like rivers into the ocean, which is ever being filled but is always still—can alone achieve peace, and not the person who strives to satisfy such desires.

That is the way of the spiritual and godly life, after attaining which a person is not bewildered. If one is thus situated even at the hour of death, one can attain the spiritual abode.

When others are enjoying for you