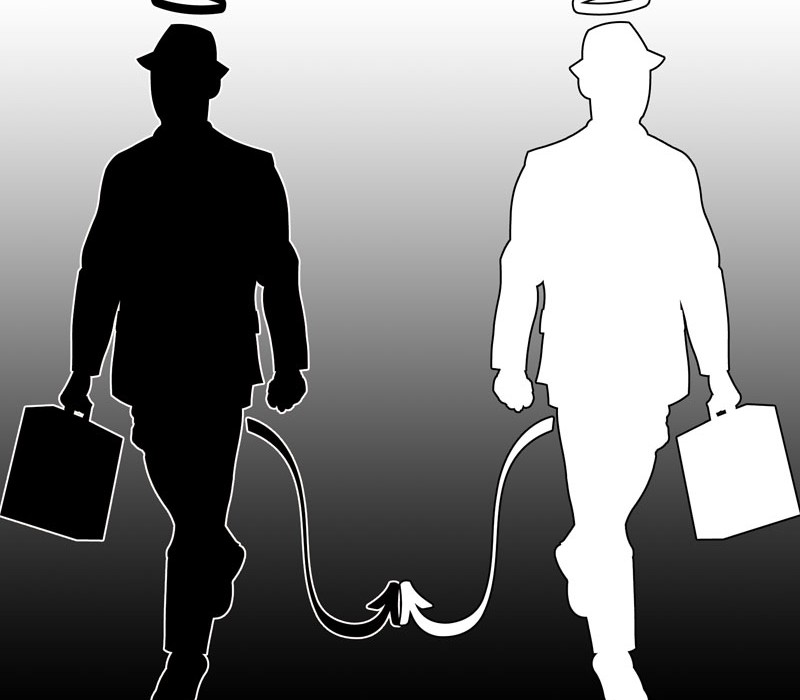 It is quite natural, it is actually innate, that conscious beings will endeavor for their own well-being and self-interest. But what is one’s actual self-interest? Not all individuals will give an identical definition of the term “self-interest”. Rather, one’s concept of identity, or how one sees the nature of the self, will determine or define for a person where his or her self-interest lies.

If one thinks oneself a physical product, a material creation, then the concomitant consciousness, the concomitant psychological state of that individual, will dictate that one’s ultimate self-interest lies in acquisition of matter. That means that one who considers oneself and others to be physical bodies will think that the highest private and public value is acquisition of matter!!! If material acquisition is placed first on the list of one’s priorities, then everything else will become secondary and lower-placed. Ideas like moral values, reformation of character, and basic good will become secondary and lower-placed.

What is wrong with that?

An individual with such existential values will, when the time comes to give preference to one over the other, give preference to acquisition of matter over a good moral action. For such a person, justice is not a universal fact but rather a human creation, or some sort of artificial social agreement. So if such a person can increase his/her material possessions by hurting another person, that person will do it as long as he/she can avoid the social repercussions that would be meted out in different forms of punishment.

Let me give you a few examples that should illustrate this grave message.

A simple Internet search will reveal to you numerous carefully documented cases of pharmaceutical companies that were selling their products, namely drugs, even though they very well knew of the horrible side effects their drugs would have on their customers. Many antidepressants and contraceptive drugs have had such a history. Despite the companies’ knowledge of the harm their drugs would inflict upon the drugs’ consumers, they sold them regardless, due to the fact that deep down in their psyche they believed that their ultimate benefit lies in acquisition of matter. The companies calculated that after paying all the court cases and penalties, they would still make a profit, so they decided to go forth with marketing their monstrous products. These kinds of actions spring directly, not indirectly, from people’s identification with matter rather than spirit.

During the Second World War, Nazis were killing European Jews at an ever-accelerating rate, and had therefore needed a comprehensive system that would help them organize and keep track of this systematic slaughter of the Jewish population. Companies bid for the job. The one that offered the best service for a modest amount was IBM, an American company. Yes, IBM, the American company that makes computers, made this offer. IBM subsequently sent their specialists to Nazi Europe to observe first-hand the process of systematic, wholesale murder of humans, and then came up with a satisfying system for keeping track of this human slaughter. Throughout the existence of Nazi Germany, American IBM workers continued to regularly complete on-site inspections and maintenance of their equipment, which was used for probably one of the darkest human endeavors ever on this planet. After the war, IBM wanted Germany, which was at that time not the same Nazi Germany but rather a new country, to pay off the remaining bills for their expert service. This is yet another dark example of the direct result of a consciousness that has identified itself with matter rather than spirit.

I could give many more examples, but let’s keep this article relatively short and to the point. For those of you who are interested to research this topic further, I would recommend that you watch “The Corporation,” a documentary by Mark Achbar, as well as look up “Eugenics” on an Internet search.

The problem with the modern world is that it is teaching, in an organized fashion—or you could say “brainwashing”—generations of youth that the identity of the self is physical, material, not spiritual. This conclusion springs forth from the modern methods of learning about the world, namely chemistry, biology, and physics. How are we then to expect this world to be a peaceful place? People identify themselves with matter and thus act in ways meant to satisfy themselves as material beings, rather than seeing themselves as spiritual beings, trying to act in ways that will bring about spiritual peace for all living beings

Just look at people’s psychology, for example. People have decided to be environmentally conscious and “green,” not because they believe nature is intrinsically sacred but rather because trashing the environment is physically hurting us. Arrrrrrghhhhhh!!! How many wrongs are in this picture! If people would identify themselves as spiritual beings who have physical bodies and would learn to see all creation as coming from a divine origin, we could finally become civilized. When asked what he thought of the Western civilization, Mahatma Gandhi said, “It would be a good idea.” In other words, he did not consider it yet civilized.

The world needs to become spiritually educated, more than ever, and I hope this article makes for such a contribution.

Talk by Mahat, given on the Christmas day in 2011.