This is an excerpt from the 13th chapter of the Bhagavad-gita As It Is, Srila Prabhupada’s commentated translation of the most famous spiritual text of India:

Text 21: Nature is said to be the cause of all material causes and effects, whereas the living entity is the cause of the various sufferings and enjoyments in this world.

Commentary: The different manifestations of body and senses among the living entities are due to material nature. There are 8,400,000 different species of life, and these varieties are creations of the material nature. They arise from the different sensual pleasures of the living entity, who thus desires to live in this body or that. When he is put into different bodies, he enjoys different kinds of happiness and distress. His material happiness and distress are due to his body, and not to himself as he is. In his original state there is no doubt of enjoyment; therefore that is his real state. Because of the desire to lord it over material nature, he is in the material world. In the spiritual world there is no such thing. The spiritual world is pure, but in the material world everyone is struggling hard to acquire different kinds of pleasures for the body. It might be more clear to state that this body is the effect of the senses. The senses are instruments for gratifying desire. Now, the sum total – body and instrument senses – are offered by material nature, and as will be clear in the next verse, the living entity is blessed or damned with circumstances according to his past desire and activity.

Text 22: The living entity in material nature thus follows the ways of life, enjoying the three modes of nature. This is due to his association with that material nature. Thus he meets with good and evil among various species.

Commentary: This verse is very important for understanding how living entities transmigrate from one body to another.  The Second Chapter of the Bhagavad-gita explains that the soul moves from one body to another just as one changes clothes. This “change of clothes” is due to his attachment to material existence, or life in this world. As long as he is captivated by this false manifestation, he has to continue transmigrating from one body to another. Due to his desire to lord it over material nature, he is put into the undesirable circumstance of being reborn. Under the influence of material desire, the entity is born sometimes as a demigod, sometimes as a human, sometimes as a beast, as a bird, as a worm, as an aquatic, as a saintly person, or as a bug. This is on-going. And in all cases the living entity thinks himself to be the master of his circumstances, yet he really controls nothing and is himself under the influence of material nature.

One is placed into different bodies based on their association with the different modes of nature –ignorance, passion, and goodness. Therefore, in order to transcend the material world, one must rise above the three material modes and free oneself of the material consciousness that is perpetuating one’s rebirth.  To become situated in the transcendental position, or to become Krishna conscious, is an impossible task for an individual to undertake on one’s own.  This advancement in consciousness can be effected only by hearing from authoritative sources.  (Although the false ego in many people’s minds tells them otherwise!) The best example is here: Arjuna is hearing the science of God from Krishna. The living entity, if he submits to this hearing process, will lose his long-cherished desire to dominate material nature, and gradually and proportionately, as he reduces his long desire to dominate, he comes to enjoy spiritual happiness. In a Vedic mantra it is said that as one becomes learned in association with the Supreme Personality of Godhead, one proportionately relishes one’s eternal and blissful life. 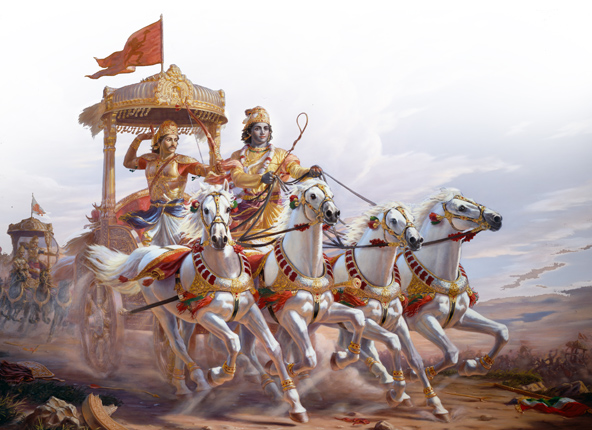 Meditation on the Spring season.