The basic principle of economic development is centered on land and cows. The necessities of human society are food grains, fruits, milk, minerals, clothing, wood, etc. One requires all these items to fulfill the material needs of the body.

Certainly one does not require flesh and fish or iron tools and machinery. During the reign of King Yudhisthira, all over the world there were regular rainfalls. Rainfalls are not in the control of the human being. When the king and the people under the king’s administration live in harmony with the Supreme -– that is, in harmony with the objective truths of the world – there are regulated rains from the horizon, and these rains are the causes of all varieties of production on the land. Not only do regulated rains help ample production of grains and fruits, but when they combine with astronomical influences there is ample production of valuable stones and pearls.

Grains and vegetables can sumptuously feed humans and animals, and fatty cows deliver enough milk to supply the humans sumptuously with vigor and vitality. If there is enough milk, enough grains, enough fruit, enough cotton, enough silk, and enough jewels, then why do the people need bars, houses of prostitution, slaughterhouses, etc.? What is the need of an artificial, luxurious, superficial life of “Hollywood” entertainment, flesh, and all other sorts of distractions? Has this civilization produced anything but quarreling individually and nationally? Has this civilization enhanced the cause of equality and fraternity by sending millions of people into hellish factories and the war fields at the whims of a particular person?

ALL LIFE IS CREATED EQUAL

It is said here that the cows used to moisten the pasturing land with milk because their milk bags were fatty and the animals were joyful. Do the animals not require, therefore, proper protection for a joyful life by being fed with a sufficient quantity of grass in the field? Why should people kill animals for their selfish purposes? Why should people not be satisfied with grains, fruits and milk, which, combined together, can produce hundreds and thousands of palatable dishes? Why are there slaughterhouses all over the world to kill innocent animals? King Pariksit, grandson of King Yudhisthira, while touring his vast kingdom, saw a dark-looking man attempting to kill a cow. The king at once arrested the butcher and chastised him severely. Should not a king or executive head protect the lives of the poor animals who are unable to defend themselves? Is this humanity? Are not the animals of a country citizens also? Then why are they allowed to be butchered in organized slaughterhouses? Are these the signs of equality, fraternity and nonviolence? [What’s our democracy based upon?]

Therefore, in contrast with the modern, advanced, civilized form of government, an autocracy like King Yudhisthira’s is by far superior to a so-called democracy in which animals are killed and people who behave worse than animals are allowed to cast votes for another less-than-animal person.

We are all creatures of material nature. In the Bhagavad-gita, the most famous Indian philosophical text, it is said that God is the seed-giving father and material nature is the mother of all living beings in all shapes. Thus mother material nature has enough foodstuffs both for animals and for humans, by the grace of the Father. The human being is the elder brother of all other living beings. He is endowed with intelligence more powerful than that of the animals for realizing the course of nature and the indications of the Father. Human civilizations should depend on the production of material nature without artificially attempting economic development to turn the world into a chaos of artificial greed and power only for the purpose of artificial luxuries and sensual gratification. This is but a bestial life, a life devoid of goodness, devoid of a higher purpose, and devoid of understanding of the intrinsic nature of the world we live in. 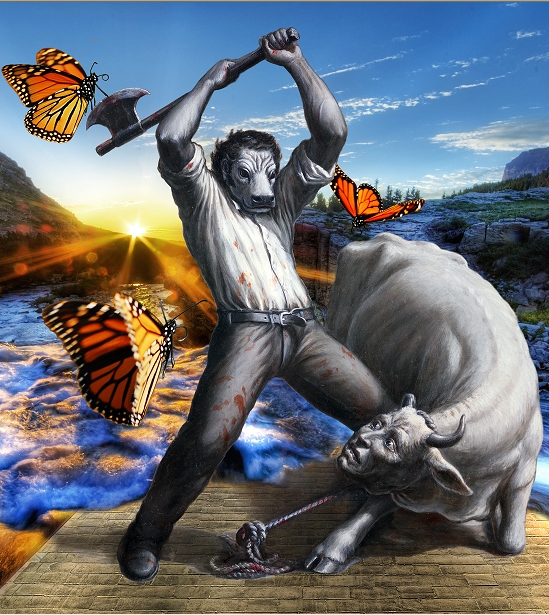 The plague of the modern pharmaceutical industry.