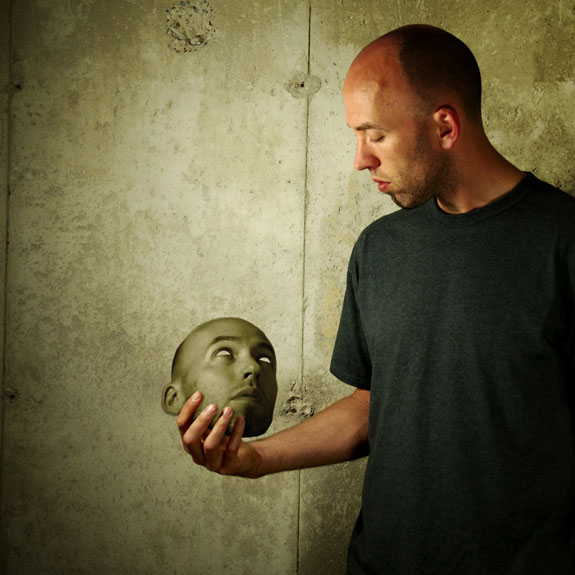 During his days as a monk, Vic DiCara stayed involved with the hardcore scene. Playing with some of the most popular bands of the time not only brought him fame but gave him a chance to field many questions from his fans and others.

HERE’s a letter he got:

Let’s face it man, you joined a club just like everyone else. You all dress the same. You all have the same bald head. You all believe the same things… You totally gave up your individuality, man. Sheep. You joined the herd, that’s all. You give it up. You’re no longer a person.

HERE’s what he wrote back:

You seem to value individuality very highly. But what you say in your letter destroys true individuality and defines people as nothing more than blank robots ready to be programmed.

According to you, a person has to be made into an individual by the clothes he/she wears, the music he/she listens to, etc. It’s the things we do that make us into the individuals we are, and if we don’t do the ‘right’ things (like if we shave our heads and wear robes) we lose our individuality.

If I have to make myself an individual, then I must not be an individual to begin with. I must be some kind of blank slate who has to go out and buy my personhood and wear my “individuality.”

You’ve turned individuality into something bought from thrift stores and hair salons.

Being Krishna conscious, I don’t take individuality so cheaply. An individual
is something I am, not something I be­come. Real individuality is not the clothes you wear, or the style of your hair. It’s deep inside the self—an unalterable, eternal reality.

Take 300 people. Give them all the exact same haircut, dress them all up in identical 3-piece suits and ties, and line them up against a white wall. That’s 300 people with exactly the same clothes and hair. But if you go and talk to them, you’ll find each one remains a unique person, a unique individual.

Our dress doesn’t make or break our individuality. A green vinyl spiked jumpsuit and purple beehive hairdo make me no more or less an individual then an orange robe and a shaved head, because individuality has nothing to do with external appearance.

“But you all believe the same thing. That makes you one big herd of sheep…”

I don’t get your logic. You’re saying individuality is preserved only as long as people disagree with each other? As soon as they all agree, they become a bunch of clones, a “herd of sheep?” That’s a zany philosophy, bro.

In math everyone believes 2+2=4. Everyone believes the same exact thing. Do you plan on writing to all the mathematicians, informing them that they’re all a bunch of mindless followers, a herd of sheep with no individuality?

Like math, Krishna consciousness is an empirically verifiable science that deals rationally with the subject of spirituality. Thus it’s no more unusual for two monks to believe the same basic things than it is for two mathematicians to believe 2+2=4.

A spiritual practitioner intensely loves individuality and personality, knowing that these qualities are two of the most essential qualities of the deepest self. But when we plunge into material consciousness, we bury that priceless individuality, smothering the self under mountains of ego, profiles, and false identities.

Mainstream society “educates” us to live as if we are our physical bodies. That makes us objects, non-persons, non-
individuals.

Here is how a regular, mainstream educated fellow thinks:

The body is a costume of the soul, a temporary character accepted in the fantasy-role-playing game of material life. To become Krishna conscious is to gradually rise above the confining illusion of bodily identification and uncover the true self, the real individual person—the person behind all the masks, beyond all the labels.

Krishna consciousness does not take away individuality. It reveals the fullest potential of individuality by reviving the original spiritual identity.

You’re Not That Body

At My Friend’s Funeral