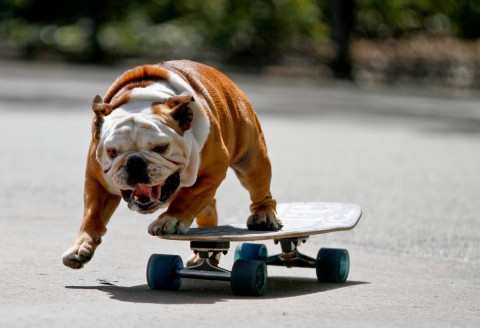 This is Tillman the skateboarding dog. He is an amazing dog, and you can see that he  loves his skateboarding. He is really enjoying it, and he doesn’t want to stop. He can go on like that for hours.

Most people can understanding a simple fact about their pets. Although they are a different species, they feel a variety of different emotions and can have many diverse personal interests, including hobbies, just like people. Many even consider their dog or cat to be part of the family.  When that furry family member dies, they even hold a funeral ceremony and commemorate its life and activities.  Some people may begin to wonder if there is an afterlife for their pets, and if …animals have souls.

Here is a real conversation of me talking to some young people from Ohio partying in Pacific Beach, San Diego, CA 2010.

Me: Do you believe that humans have a soul?

Me: Do you believe that dogs have a soul?

Me: Do cows have a soul?

Me: How it is, that humans and dogs have souls, but not cows?

Ohio Girl: Cows can’t have a souls, because they just produce methane and they taste too good.

This is our society. The home of the dull-minded, hypocritically inconsistence, philosphically bankrupt, self-gratifying, morality concocting, quasi-ethicists. Add religion to this ignorance, and it gets even cooler.

Here’s the official Catholic version on the subject:
(from forums.catholic.com)

“All living things have souls, but only angels and humans have spiritual souls. Animal and plant souls are material principles that cease to exist at death. Angels do not die, and human souls survive the death of the body.”

“In short, it is possible that God may re-create and glorify creation, including animals and plants. We may hope then that it may be possible to meet deceased animal friends in the next life.”

In otherwords what these people are saying is:

“We humans are entitled to have a soul, but animals do not. But…wait…err…I like dogs, so they probably could have souls. But cows? Come on, no way! God put them here for food only, because it is obvious that we are the center of this universe, and everything revolves around our pleasure and consumption.”


Ants create a life-raft to save thier colony

Every species on this planet is equally pursuing the right to happiness, self-preservation, and the fulfillment of their personal desires.

Actually the very question, “Do animals have souls”  is not a very intelligent one, because the word animal comes from the word anima, which means soul.

Anima means that which animates the physical body. In other words, what do we call a body in which there is no longer any animation? We say that is it dead.

A dead body means no anima, no soul. A living body means a body with animation, with a soul.

Let’s make it really simple, in case you can’t follow.

Get Monsanto Out (GMO)